Dear Diary, Today we left at 7.00am yuk and drove 4 a long time til Northampton & had lunch. The “café” we went to stank & since I had a sick stomach already I almost chundered (again). The rest of the drive woz v. boring & we arrived at about 5pm after getting Big Rooster for tea. Went up 2 Sonia’s & she was home!! YAY! Went to the cubby that we built but it’s all fallen in. Suck. PS. Tonight we camped out in our homemade tarp tent. It was really humid & water ran all down inside the roof.

“Helped” Mum today… accidentally left the tap going in the washing machine &  flooded out the laundry (oops!) And then I hit my knee on the washing machine, nearly breaking my legs on the wet floor. Haha loser. Tonite: movie nite with Coralie! Misery. We cacked ourselves when Kathy Bates broke his legs with a big heavy mallet! Went to bed at 2am, went to sleep at 4. Meanwhile we scoffed a packet of twisties, popcorn, coke & BBQ biscuits, as well as cappuccino icecream. ON TOP OF Mexican pork chops for tea. Yum. love boarding school holidays!!

Well, we are over halfway there in only 28 hours; we’ve finally stopped for the night in Merredin at a rather nice motel. It has a pool! First swim after 3 weeks in the rainy Victorian cold. Couldn’t believe how much it pissed down!

Immersed in Japanese culture today – watching “Atomu” (Astro Boy) in the original Japanese. Seen it so many times and still haven’t a clue what’s going on. “Monkey” is on Wednesdays – I try to follow it but they talk too fast!! Justine’s spewing cos the whole time she was here it was never on. It makes me feel so at home!!

Before I’m called to gohan I’ll quickly tell you about my host family. There’s Okasan, of course, who’s the sweetest old bat there is. She’s a great cook, and so far she’s let me do whatever I want. Second week I  did an all nighter in Osaka with the other ryuugakusei and she was cool with it, long as I crashed at someone’s. (Beth & I crashed at Bob’s (monk) host dad’s temple in Rokko). I always like having a cup of tea & a chat with her. Her husband seems ok but we haven’t really talked. He walks in from the genkan at 7pm, drops his pants (I nearly had a stroke the first time but he wears long woolly underwear) and goes to the kotatsu in front of the TV. Okasan puts his tea in front of him, Hiromi gets him a beer and he watches TV and slurps and smokes all night. The older brother is a nice guy – he’s always trying English, like “weight” and “I’m home” and “fuck you, dickhead” (nb he didn’t say that to me, he watches a lot of American movies). Last night he wanted to know how to say “swarms of cockroaches”. (What!?)

And last but not least is Hiromi, my younger big sister, my onechan and partial roommate. We both hate getting up in the morning, love movies and chocolate and have a pretty weird sense of humour. She taught me the best swear words (Onisan can’t take all the credit), like “mukatsuku!” (knew it already – “FUCK!”), “shimatta!” and “chikushou!” She works at the family business along with Otosan, Onisan and oldest sister (married, lives away from home a whole block away!) who has the cutest kid, Takuya. He was scared of the koala handpuppet I gave him and kept chucking it down the stairs. They’re the perfect family for me, and it’s really neat having an older brother and sisters!

Helping out in the shop – mostly humouring the annoying arsewipes who come in and waste Mum & Dad’s time saying things like;

“Do you make cakes?” (Do you mean ‘cakes’ like what’s written on the big fucking sign out the front and the examples that are displayed in the window?)

“I want a birthday cake right now. Can I have that one in the window?” (It’s 40C+ outside, the sun’s shining on it, and the ‘cake’ part is Styrofoam. Still want it?)

“I don’t know what kind of cake I want or how big it’ll be, but can you give me a rough estimate of how much it’ll cost?” (No.)

“Oh, can I spend half an hour asking questions and getting advice on decorating a cake I’m being paid to do, then leave without buying a single thing?” (Sure! …arsehole.)

Have noticed a karate dojo across road from bus stop – “Zenshin”. And underneath it “te” & “geri”… the karate styles you learn there? “Te” meaning hand and “geri” meaning diarrhoea? It must be an offshoot of karate where you bow AWAY from your opponent.

Gross!! So hot and humid! Working at Straddie is particularly heinous because it’s a swamp. Technically, a swamp with a layer of sand on top. Of course, you do get the occasional cool sprinkle from above… then you realise there’s not a single cloud up there. It’s actually cicada piss. Who knew insects could piss? Especially that they could piss that much? If a whole bunch of them are in a tree together and decide to go potty while you’re cycling underneath, it’s like getting a golden shower from a small pony with a prostate problem. I don’t wear my hat to keep the sun off, it’s to shield my eyes from flying urine!! It’s amazing how many people enjoy that fresh little spritz – until they realise what it is.

After Shan saw I was awake he came in & asked if “Kuntlash*” woke me up at oh dark hundred this morning… apparently he really pissed Shan off, wolf whistling for 20 minutes straight which is his way of saying “I’m bored/Where is everyone/ I’m a grumpy little turd today.” He’s so highly strung! Once he was sitting on Shan’s knee when Shan farted and scared him so bad he took off and flew into a window. HAHAAAAAA!!! …sorry Kushlash.

Clothes shopping today: GROAN. Got 2 coloured singlets, 2 long sleeved tops and two shorts, same styles but different colours… the possible permutations are mind boggling! White+pink+khaki, white+pink+blue grey, white+ blue+khaki, brown+pink+??? … 8 amazing new looks! Plus white+blue grey, blue+khaki… ! (Not to mention inside out forwards, inside out backwards…!) My fashion sense is really coming along. Not. Off to Moonlight Cinema at New Farm Park to see Little Miss Sunshine tonight – J, Din, Shan & Me. Shan & Din’s first meeting and they bonded – over the shared experience of the cute lil staffy behind us and her nonstop queefing through the entire movie.

Finn’s started to make word sounds… by accident? – I swear he called out “hello” in the middle of his 2am feed last night! And the other day his cry sounded like aaawaaahhmmummyyy! I came running!

Pretty boring around here, but rather glad we’re not in Europe or N. America right now. The longest cold snap in 30 years; Arctic temperatures, snow piling everywhere, power cuts, no water or heating, avalanches… scary as! They’re running out of salt and sand for the roads (how can you run out of SAND?!) and the entire Baltic Sea has frozen over. Hitting the U.S. too – they’re even getting snow in northern Florida. FLORIDA!

So happy he’s finally here. He was in a hurry – first cramps at 1.45am, strong contractions less than 3 minutes apart by 2am, 8cm dilated by 3.30am, and by 5.34am he was out! Flew out with one arm in front like Superman. OW. Waters didn’t break til just beforehand, luckily Jo the midwife has fast reflexes and got out the way. Justine did well to stick around, what with all the resulting slip’n’slide & me mooing and yelling (again!) but she did great. And no intervention this time, aside from Dr. Cheese’s seemingly enormous hands (bastard!)

Welcome to the world, Rory. I got quite emotional when Finn came in… their first meeting went well; Finn said “hello Rory” and said he was “a little bit cute”. Especially when he makes funny little noises, including one that I can only describe as ‘boingoingoing’. 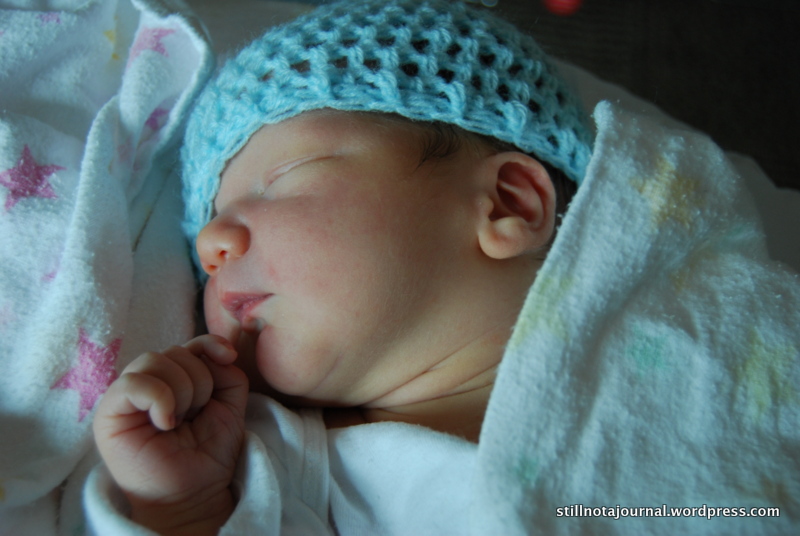 Another day that is no longer ‘just another day’, and our little family is complete. Happy (belated) birthday, Roars!