(Not my parents. I am one of the parents; it was poor Finny who got the cursed t shirt.)

Do you or your kids have a particular item of clothing that seems… unlucky? A pair of shoes made from a broken mirror? Or something handmade by Buffalo Bill?

Maybe said item cops an unfair share of abuse. Shorts that get new holes every time you wear them? A particular jumpsuit that seems to cop every Number Three enormous nappy-defying poo grenade that your baby unleashes? Or perhaps a favourite shirt that always seems to get vomited on, whether by your baby, others’ babies, or yourself?

White items especially attract crap like a magnet. Rory’s souvenir from Daddy ICC Cricket World Cup t shirt from N.Z. is a case in point, which arrived at the washing machine today in its usual condition:

Why would anyone make anything kid-sized white anyway? That wasn’t composed of Teflon.

Finn had a t shirt that kept getting trashed too, though not with mud. A souvenir tee from Lord Howe Island, where J and I went for our honeymoon (not ominous at all!!) and it was cute!  Finn called it “the laughing surfing doggy t shirt” but for a while there I wondered if it was carrying some kind of malignant entity because it seemed like every time Finn wore it it ended up soaked in his blood.

Finn slipped off a footstool and smashed his face on the kitchen bench. Blood poured from his mouth and I thought he’d bitten his lip but NOPE. Top left incisor knocked clean out. Lots of blood, but in 15 minutes he was fine and demanding J chase him.

Running around with his mates after their swimming lesson, trips and falls flat on face, cutting his lip wide open. Blood all over him and J again; freakily they’re both wearing the same t shirts as they were on Toothday. (J’s features a stick figure on fire with the caption “I DO ALL MY OWN STUNTS.”) I may have jinxed us by randomly thinking how well the new presoaker got all of the bloodstains out (can’t remember the brand I used dammit – totally wasted opportunity for a sponsored post there.)

No blood for the cursed shirt for four months, but it was just toying with us. Finn tripped on a flat footpath and gashed his forehead on the metal edge of a riverside sculpture. BAM. Blood pissing all over the place and four stitches. No photos, because his big blue eyes behind a curtain of blood is something I actually don’t need help remembering. 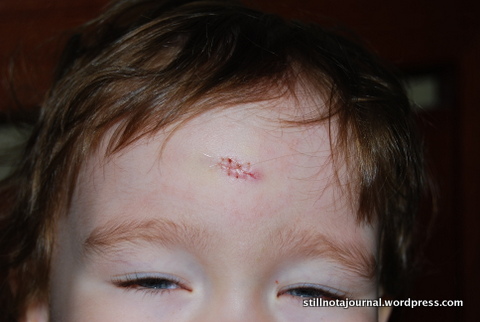 OWCH. Nearly 5 years later he still has the scar, but was quite chuffed upon finding out he has a scar in the same place as Harry Potter.

We didn’t darken the halls of A&E again for a couple of years (until this happened), which was either because Finn stopped being such a huge klutz, or because the shirt’s monstrous appetite for blood was finally satiated. Either way I’m happier with less painful stains, even if they are gross…

But at least he doesn’t have to deal with the crap that Rory’s undies do.

And at the other end of the spectrum, do you possess clothing which bestows upon you unusual levels of *good* fortune? I seem to hear about  lucky undies quite often (any undies that avoid the dreaded skiddy are pretty lucky IMO), and socks, but I don’t get attached to underwear. Unless I don’t shower for a month.

If you’re having a run of misfortune I suggest you check out this page for tips on how to avoid it by dressing for luck; for example if you accidentally put on your shirt inside out in the morning FOR GOD’S SAKE don’t turn it the right way around!! Bad luck! …leave it inside out. And just stay inside all day.

And if you kick someone in the heel while walking behind them apparently you must tap them on the back three times to avoid seven years bad luck. Of course, they might think you’re trying to mug them and call the cops on you… well, what would you prefer? Seven years bad luck or 6 months good behaviour bond? Just make sure when you go to court you’re wearing your lucky undies.