Yesterday was *mostly* boring as we had to stay indoors – Rory had kinesiology for his allergy to our tallow wood blossoms on Monday and needed to avoid them for 25 hours afterwards. I didn’t want to go anywhere as we’ve been out heaps this holidays (playdates to the movies and the beach, Swell Festival, Oz Comic-Con, Nature Play… I might even blog them when I get half a chance) and we needed a sloth-about-in-our-pyjamas day.

Unbeknownst to me there was a severe weather warning in place. When it got so dark I had to turn the lights on I checked the Bureau of Meteorology rainfall radar and it looked like it was going to *just* miss us, as usual.

When I looked outside there was no leading edge looming; looked fairly boring. We got some wind gusts and a few big splats of rain, then 5 minutes before Rory was allowed to go outside again, it suddenly unleashed. It wasn’t the usual kind of storm where it arrives, goes for 10 or 20 minutes then the sun comes out; this one seemed to be forming right on top of us. The rain would hammer down for 15 or 20 minutes at a time, then ease off or even stop for a minute before starting up again.

The thunder got loud enough for me to suggest the boys build a fort with a sheet hung between the couches. They had fun with that, with Finn flinging cars and soft toys on top and Rory underneath poking them off.

I looked out the window and saw sunlight beyond the dark grey cloud covering us, and figured it was nearly done. Then there was a massive flash and simultaneous crack of thunder and the lights all flickered and went out. It came back on in a few seconds, and I had to reset the oven timer for the brownies. The boys were excited – “Everything went orange Mum!”

It started to hail a bit and the boys wanted to go onto the balcony to collect it. When I opened the sliding door there was a very strong, odd burning smell; is that… ozone? Is lightning about to hit us? Nooo we’re not going even slightly outside!

The storm raged on and off, making us think it had passed before scaring the shit out of us with more lightning and thunder. It did this for at least an hour, and the lights went out again. And came back on again. And I reset the brownie timer again.

We ate some (slightly burnt) brownies. The boys were great; especially Roars; I remember a couple of years ago if he even heard a distant rumble he’d be over to me like a shot and would refuse to budge from around my neck until it was over. He wasn’t even all that happy with planes flying overhead.

When it finally passed I went out to check the tarp on the washing line and was surprised to see a massive branch down in the driveway. I hadn’t thought the wind was that strong. 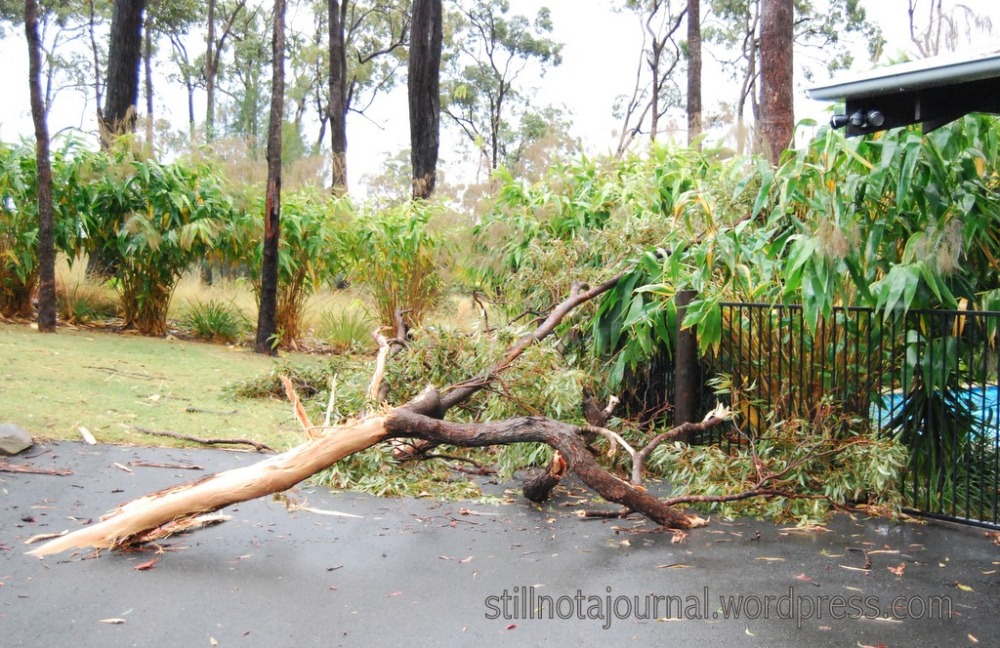 Then I looked up to where the branch had fallen from: the top of the tree was gone; only a jagged stump remained.

Then I looked at the branch again… there seemed to be an awful lot of torn and bare wood for the top to have just broken off… and there were all these bits sticking out of the trunk. I walked to the far side and saw that a ragged scar of splintered wood and stripped bark spiralled around the tree from what was left of the top all the way to the ground.

Holy shit, lightning hit it. That tree is less than 10 metres from the house! There were matchsticks scattered all over the lawn, and strips of wood on our roof. 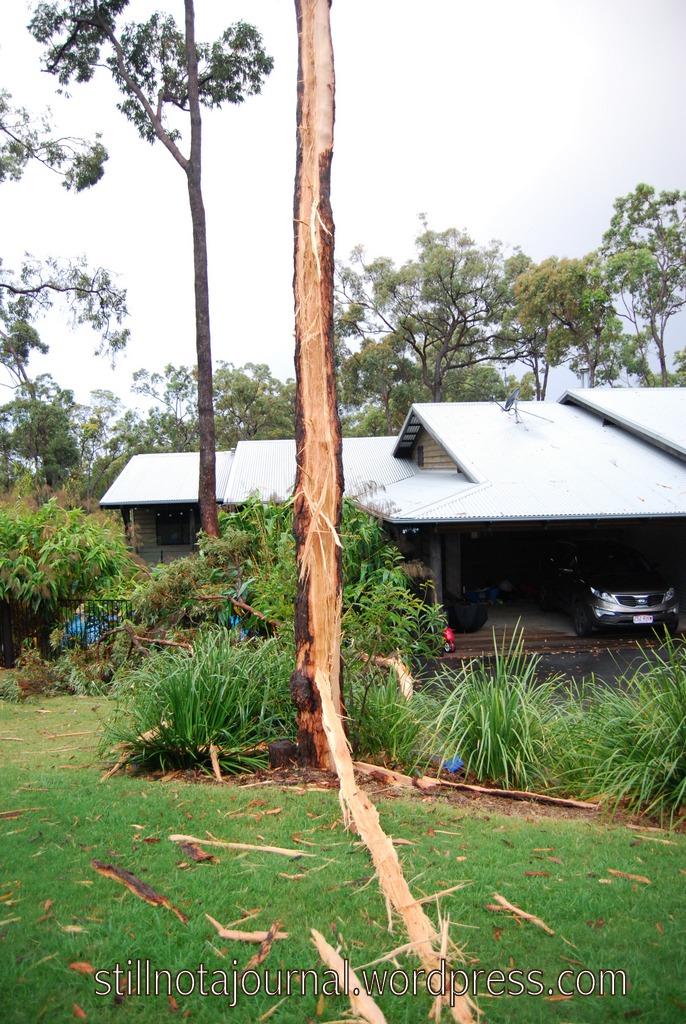 The open wound at ground level was almost half the circumference of the tree.

Shit. I liked that tree and was going to use it to put up a swing.

Inspected the fallen bit, and continued tracing the bolt’s path as it’d snaked around the tree on its way to the ground. 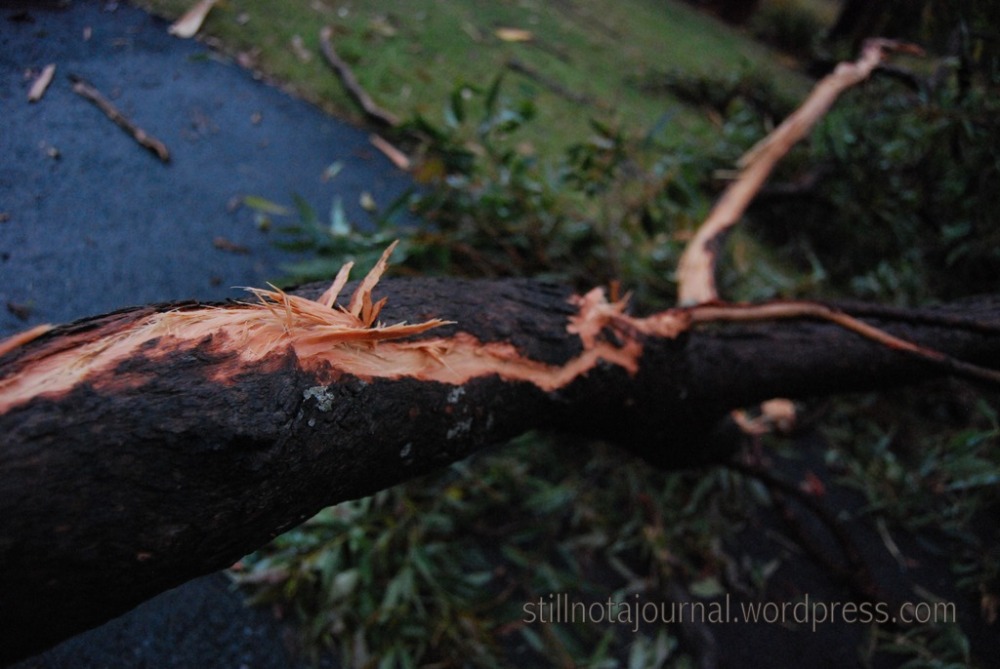 Holy shit man, that is cool!

SO glad it didn’t hit our house or any of our neighbours’ houses.

SO thankful it hit that tree and not one that would’ve landed on the house.

SO happy the bolt didn’t jump from the tree to the house and knock a hole in the roof, or start a fire, or fry my car!

SO stoked that instead of being on the phone to emergency services or the insurance people about a hole in our roof etc I was able to sneak around the corner at sunset and catch this:

Unfortunately our tree is cactus, so to speak. (Update: About a week later we noticed the tops of several nearby trees dying off, some in patches. Got the tree guys in and turns out that single bolt took out seven of our trees; blew up one but the charge arced around surrounding trees as well. Four big ones and three younger ones and we had to remove the lot. Shit. Still, I consider it a lucky escape!)

I’m sure Dad would approve if we made one stump our new bird feeding spot though. The old one, the hollow stump down near the fire pit, has been almost completely eaten by termites and there’s nothing left to put the food on.

I’d been thinking that we needed a new one, and the very next day a bloody great lightning bolt chooses the perfect spot for me. Not too close to the house so the birds shit on everything but not too far so I have no excuse for being lazy and not putting food out, and with a clear line of sight for bird perving. This tree will have a new life, and in a couple of years, as firewood, will make itself even more useful by helping keep the house warm.