I went to Billy Connolly’s High Horse show in Brisbane last Saturday night… I apologise to everybody in advance because this will be my sweariest post ever; really Mum you might want to miss this one. Or bits of it. At least until after the  gifs. Billy has often said that after his shows people go home using the word “fuck” a little more often than they used to; well yeah… and then some. He assures me it’s only temporary!

I’ve adored Billy Connolly for years. Actually, it’s been decades now, as I’ve mentioned. And yet for one reason or another (poverty, distance, one month old baby being annoyingly demanding etc) I never got to see one of his gigs before.

Having been a fan for such a long time I’d built up some pretty big expectations, but I was also realistic; he probably wouldn’t be the Billy I remembered. He’s 71, a cancer survivor, and in the early stages of Parkinson’s Disease. I mean, give the poor bastard a break!

And yet, he was the Billy I remembered! Even just hearing that familiar Scottish accent made me smile, and when he really got going I was dying; brilliantly taking the piss out of himself, his age, his health issues. Ignoring taboos as he always has, and as he puts it, ‘ageing disgracefully’. Turning the air blue with his hilarious rants.

For example, he explained ‘cunt’ is just a casual word for a person back in certain parts of Scotland, much like ‘bloke’ is here… he said he once heard someone in Glasgow say, “Who’s that cunt with the Pope?” (Um… wild guess… Australian Prime Minister Tony Abbott?) But despite this, Billy still reserves the term for only people who really deserve it. Like people who tell him to eat brown bread. And movie set armourers. And people who stand on and block travelators at the airport. Yes. I would also add drivers who don’t use their indicators to that list. (You know who you are.) (Cunts.)

He was a little slower, his trademark physical exuberance – including his repertoire of funny walks – greatly reduced; we didn’t see the classic ‘one-legged fish-and-chips drunk’ or the ‘irate customer’ or the ‘carpark attendant’, but he showed us a new one, the ‘couldnae-give-a-fuck’ walk. I intend to use it often.

He’s  still the irreverent, bawdy schoolboy he always was. I laughed so hard I got a stitch, and had to massage my face because it hurt. So much. So many funny stories! Some of the incidents they’re based on though… oh my God. If those things had happened to me they would be fuel for my nightmares. His knack of always finding the funny, and thus the positive, in any situation no matter how dire, is one of the reasons I love him so much. Billy, I love you, man.

Then suddenly, after 2 hours of laughing our arses off, the words I’d been dreading; “Ladies and gentlemen it’s been an absolute pleasure to be here, thank you very much. Goodnight.”

Nooo! It’s over?! I clapped and whistled with everyone else but to my surprise also started to cry. And not a ‘one little poignant tear running out the corner of my eye to be quickly wiped away so no one’s the wiser’ cry, the ‘scrunched-face, tearing-up-so-much-I-can’t-see, hitched breathing’ cry, with snot. What’s going on? Am I suddenly at a fucking One Direction concert?

I wanted to take Billy home with me I think; I felt bereft. Being a huge fan for such a long time, and then finally seeing him in person – knowing it’s probably the only time – all hit me at once. And then I had to walk all the way back to the car through crowds of strangers, tears streaming like I’d just had the most horrible time ever.

My initial plan for after the show had involved… I dunno… (I have no idea how one does these things) finding a roadie or loitering at the stage door and asking if Billy was signing autographs or something. I rethought this plan because a) he’d already given us so much tonight and I felt like a selfish bitch to want more, and b) I was in a fucking state. By the time I’d driven half of the 80 odd kilometres back to the Gold Coast I’d gotten my shit back together; I reminisced about the gig, and thought about what The Big Yin means to me, apart from being on my side when it comes to loving toilet humour beyond the age of 10.

Our family never swore, for all that we were surrounded by fishermen and country bogans… well, Mum did a bit, but it was always mild and always in Dutch so it doesn’t count. The kinds of  people at school who swore the worst were also the people you avoided because they were mean and picked fights and stuff – I equated bad language with bad character, I guess. Billy swears constantly and is capable of being extremely rude*, but underneath it all he’s a lovely bloke. He encouraged me to see past the rough edges in people. (*usually to extremely deserving people however.)

4.  He is one of those free spirits who tacitly gives the rest of us permission to be ourselves, and to live with an open heart.

Billy was by all accounts a ‘hard’ man, a working class welder, rough as guts as I’ve said, but after entering the arts scene and hanging out with artistic types, he experimented with fashion, befriended a large variety of people, and made a concerted effort to become ‘windswept and interesting.’ I remember a story he told once about being in a pub in outback Australia, some cliched intolerant small country town. Boozing up was apparently a major pastime; in pride of place on the pub wall was a toilet seat – a trophy for a drinking competition. He was sitting at the bar wearing an interesting ensemble featuring heart-shaped strawberry earrings (a gift from a friend) when one of the local rednecks spotted him and muttered belligerently, “Bloody poofter!” Without missing a beat Billy gestured at the toilet seat on the wall and retorted, “Who took your picture oot the frame?” He got free drinks for that, and made himself a new friend.

During an interview when he was asked on the spot to come up with an Eleventh Commandment, he took about two seconds to answer; “Thou SHALT.” The main tenet of Connollicism.

6.  He reminds me of Dad in some ways, even though Dad never swore, never punched photographers and never skipped about naked outdoors (to my knowledge).

I admire them for how they both overcame abuse – in various forms – during childhood, to become happy, resilient men. With a great deal of help from the respective loves of their lives, with whom they enjoyed happiness, support, and a family, neither went on to repeat the mistakes of their own parents.

Also because both of them are awesome storytellers! My two favourite yarn spinners, as a matter of fact.

7. Lastly, to grow older without ever growing up.

He’s always said he wanted to age disgracefully – if ageing gracefully means letting the snow on the roof cool the fire in your belly, forgetting your inner child, and never straying from a comfortable armchair, he is an utter disgrace. But I think ageing gracefully means finding ways to keep doing what you love, continuing to adventure and grow, staying weird, and not letting old age make excuses for you. In his 50s he spent 10 days alone in the Arctic. To celebrate his 60th birthday he dyed his greying beard bright green. Then changed it to pinky purple. He kept riding his motorbike well into his sixties; while touring Route 66 in the U.S. it flipped and landed on him, but he was up and filming again 4 days later. Now in his 70s he has survived cancer and is coping with Parkinson’s Disease on top of the general annoyances of ageing, and is doing so with good humour and a positive attitude. I hope he can still play his banjo. He can still hold an audience in the palm of his hand for over 2 hours even though performing is harder now and makes him increasingly anxious. He’s recently taken up drawing, and is an exhibited artist. (Well technically he’s always been an exhibitionist, but now he mainly exhibits himself indoors.) 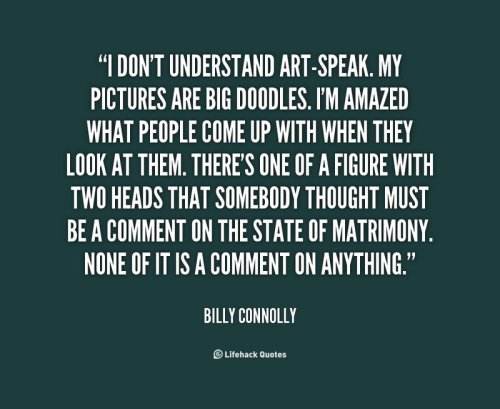 Thinking about it, I do get to take him home with me. I have two books, stand-up DVDs, various movies and all of YouTube where I can hang out with him. I have also developed a special ability (‘a-Billy-ty’???) whereby I can’t see a picture of him without also hearing his voice in my head.

Some of my favourite Billy-isms that pop in there:

– “IN YE GO, YE BIG JESSIE!” From stories he told about swimming in the freezing North Sea as a child, I want to yell it every time I see someone inching tentatively into chilly water. Especially J, who refuses to swim in anything cooler than 28C.

– “This bit… goes into fucking this bit”. Classic Billy. His version of the seatbelt demonstration on a plane. I hear his voiceover and snort to myself every time I watch flight attendants do the safety briefing.

– If and when the time comes, I know what kind of incontinence pants to shop for.

– And now I shall laugh and think “c*nts” whenever I get on a travelator as well.

Thank you Billy. I really mean that.

The Billy-induced sweariness might’ve worn off by now, let’s try the ‘couldnae give a f*ck’ walk one last time.

P.S. If after reading this post you suddenly find yourself craving a nice Big Yin Tonic, I recommend you start here.