Dunners Day 2. We didn’t have morning tea at our usual place today – we figured it would be overrun by blow-ins hoping to run into Inigo Montoya. (For newcomers thinking what the hell are you talking about, Inigo Montoya?!?!, see previous post.) Went to a new place out on the Otago Peninsula, and afterwards, as the rain had eased off, walked part of the nearby Karetai Track. The track was nice and wide, and really easy to start off with, though rutted in a few spots.

We passed several paddocks – the sheep were too cool to be seen with us but the cows were quite nosy and sauntered over. The boys thought they were awesome, in particular their awesome turds. Judging by the amount of cow cookies being manufactured their milk was probably curry flavoured.

The clean salty air and the stunning views of the wild Otago coast were invigorating, and we would’ve loved to have kept going, but when it started getting much harder we  decided for the boys’ sake we’d better head back. The full walk is over 4km (each way) and  the descent to Smaills Beach is quite steep – a bit much to ask of our short people. Rory still insisted WE’RE GOING TO THE BEACH MUMMY,  so we drove around instead.

At the start of the single file access track was an information board about local wildlife, including seals and sea lions who often lounge around on the beach and in the sand dunes. So naturally, because I need more grey hairs, Finn decided to go first. The beach seemed deserted. Kept our eyes peeled though.

I’ve seen sea lions several times in Enzed – including a wildlife tour in Dunedin, and I still remember our guide, Bin (he might’ve meant Ben), drilling into us the importance of respecting the ground rules;

(I’m paraphrasing.) He was determined to make us understand, though; he loved and respected these animals, and didn’t want us upsetting them. Also, if one got pissed off and start chasing us he was the one who’d have to try to distract it, using himself as a decoy. Reading between the lines I guessed he’d had to do that a few times due to the rampant stupidity of some people and their unwillingness to follow simple instructions.

So there weren’t any sea lions, and it was also too early to see any little blue penguins – they nest by the mouth of the creek – so we found other stuff to do.

Ro had great fun getting chased by Macy, and Finn went with Susie to explore.

We used a half-buried fence for balance practise…

… and a huge dune for practising running really fast on a really steep slope without tripping and landing on your face. Or in Rory’s case, sliding down on your bum and filling every inch of your clothing with sand. 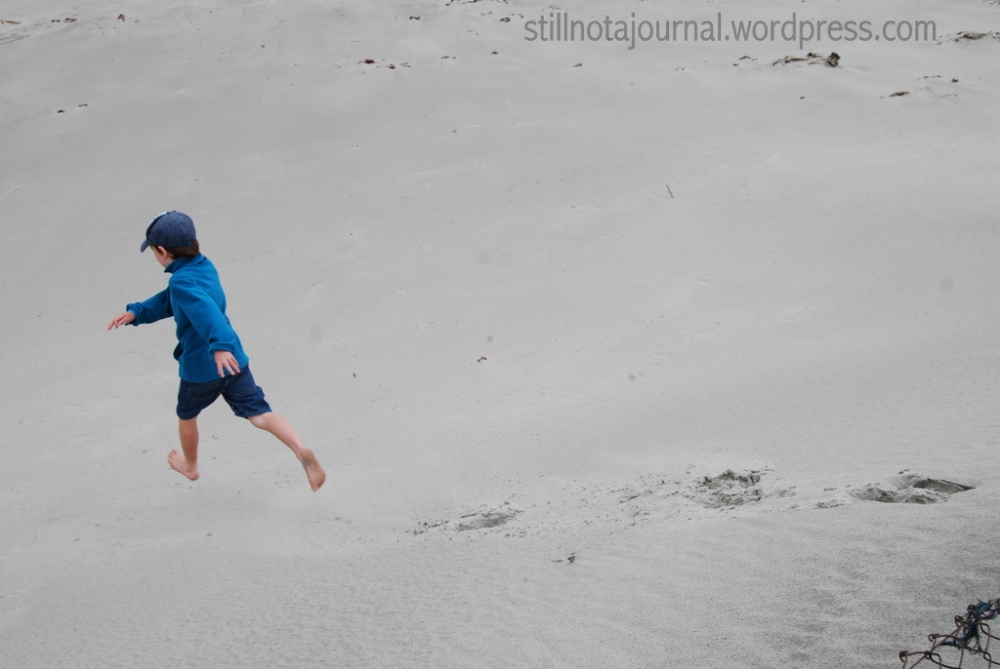 We did come across one particularly  interesting object washed up on the shore:

It’s actually giant sea kelp. Just seaweed, but it made me a little uneasy. Okay it freaked me out. Probably thanks to early-80s Doctor Who PTSD-induced flashbacks, because I instantly thought of this –

And maybe also this

The root / attachment thing just needs fake teeth and some lippy and it’d be a dead ringer for Audrey II.

You don’t see it? It must be just me then.

Eventually all the running around put the boys in the surf, where they were surprisingly stoic considering the water was about 15C colder than they’re used to. Rory’s jeans got soaked but he wasn’t bovvered until the salt and cold started stinging the hell out of his poor little pizza legs. Time to go…

Towering dunes, buried ruins, sea lions, sea monsters, teetering boulders, cliffside trails, one legged seagulls and a deserted beach, stretching temptingly off into the distance. Hopefully we can have a proper go at it next time.