Since we got back from New Zealand a few people have been asking me when’s the best time to head over for skiing. To which I helpfully answer I dunno. Although the South Island has pretty good snow throughout the season, generally it gets the best dumps of snow either at the start of the season (July) or towards the end (September). This year we waited until the end and there was some good snow shortly before we arrived, but because of the beautiful warm weather a fair bit of it melted. Which was still fine.  It was fabulous, in fact!

I’m glad we went when we did, because after we finished on the snow we got to see Aotearoa cloaked in her gorgeous spring finery. I’d never experienced Spring like it and it blew my tiny mind. Everywhere we looked nature bloomed in brilliant hues of pink, red, orange, violet, white and yellow on trees, hedges, bushes and lawns. I took over 1,000 photos IN SIX DAYS.

I might even go so far as to say it might be worth living in such a cold climate if you get to see all of this stunningness every year! And to appreciate the passing of each phase of the year more thoroughly. 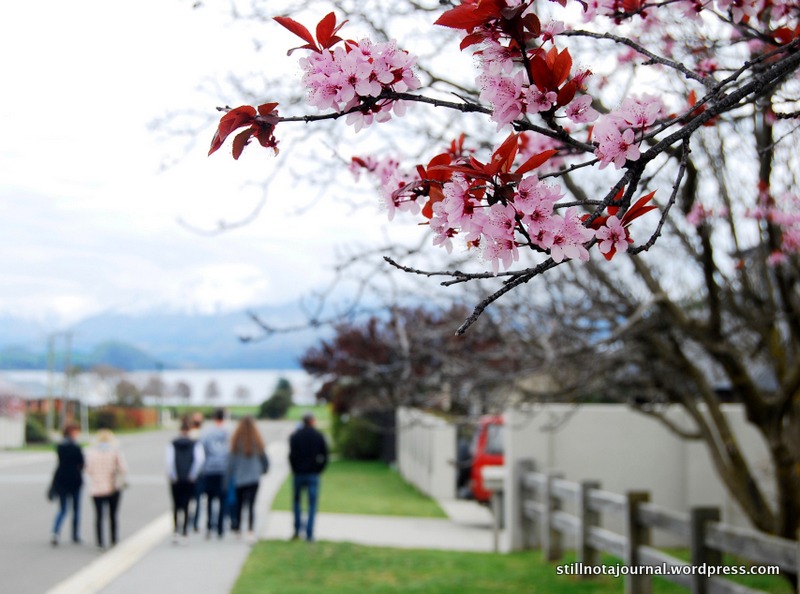 I finally get why springtime is big for new beginnings, and romance, and everyone just being generally happier. It’s warmer, brighter, colourful and vibrant. Everything is humming with life. Though that could also be the bumblebees.

Maybe it’s something in the air, something our Cro-Magnon brains respond to subconsciously… it’s time to get out of the house and get outdoors!

I’ve always said autumn was my favourite season, but I might have to qualify that: my favourite season in Australia. And Japan too. Even though we don’t have proper seasons on the Gold Coast – from winter to summer the temperature jumps about 10C, the humidity shoots up to 75%, and it’s wetter with more storms.

But we have no “dead of winter”. Everything stays warm and lush and green except for a scattering of imported trees. Oh, and our native Illawarra Flame Tree of course! It drops its leaves then in spring does this…

But springtime in Enzed is something special. A road trip is stunning at any time but when the countryside is bursting with colour from flowering gorse,  grasses, kowhai and various fruit trees there’s even more to look at.

(Please note if you ever ask for ‘some Tuis’, especially in Sydney, make sure the bartender gets you these 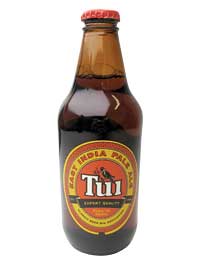 Our overnight trip to Invercargill to visit the in-laws was short but sweet (the boys loved Bill Richardson’s Transport World, might tell you about it later) and we enjoyed the Devil’s Staircase with its stunning views of Lake Wakatipu twice! No photos though; J doesn’t stop at any of the lookouts because we’ve driven it so many times.

Around Arrowtown was particularly gorgeous. I walked into town, the shadow of the hills chasing me the whole way, everything backlit by the afternoon sun. Blossoms glowed like hundreds of tiny lanterns; light pink, dark pink, white, yellow, orange and red.

My favourite bit was a gorgeous little old graveyard bounded by a schist wall, the wrought iron gate flanked by cherry trees. 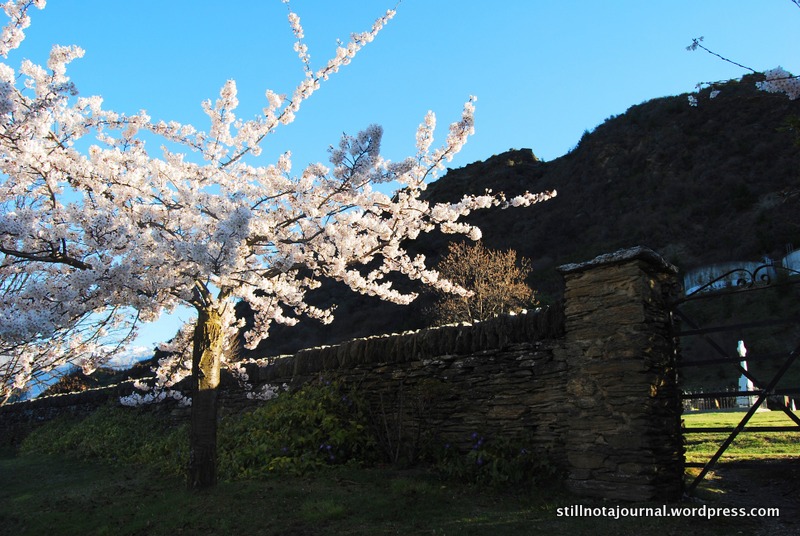 It was so peaceful with the sunlight streaming through, the occasional petal fluttering down, dislodged by foraging bumblebees.

I shattered that peace a few times with my sacrilegious swearing though; frustrated with my camera and myself I was having rather a hard time balancing the extremes of light and dark. Note for next time: study up on ‘High Dynamic Range’. 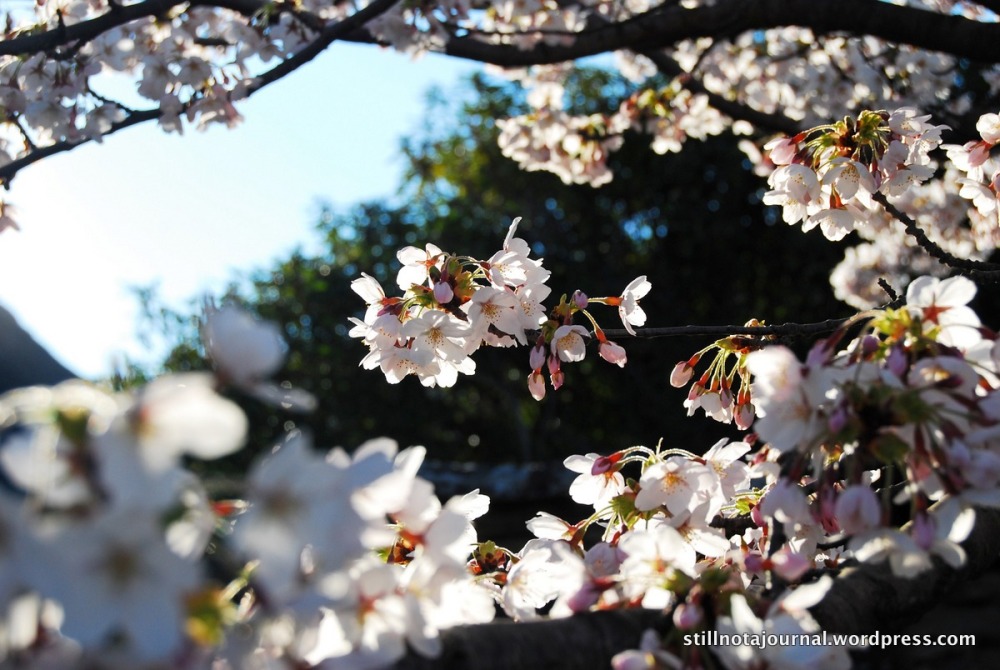 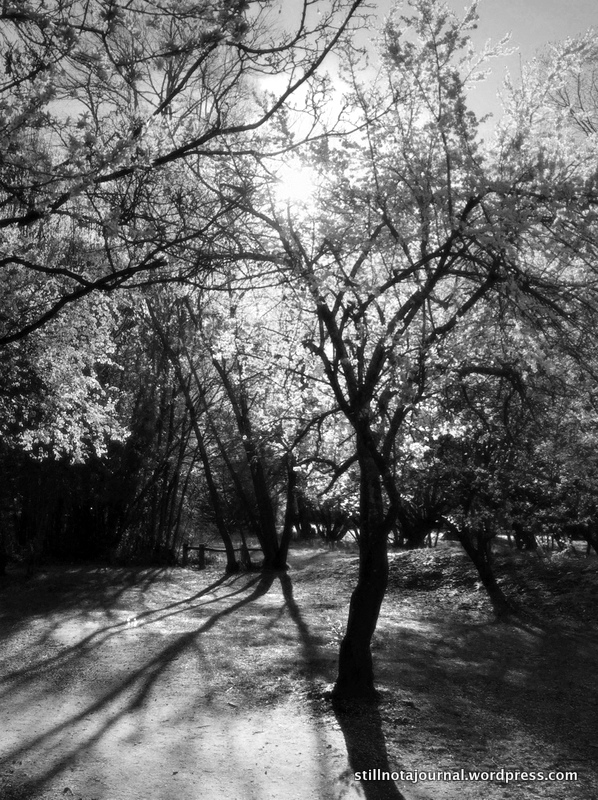 Eventually made it to town – normally a 10 minute stroll my compulsive photo taking blew it out to about an hour. SO FUN!

Had just missed exciting talk of SIL Becky’s big birthday for next year – it’s in Fiji (!!!) – but was just in time for a local brew and a delicious tea; half my crumbed blue cod and half of J’s pork belly sliders… OMG. Sliding pig tummies are definitely added to the list of “must nom” holiday fare.

Quote of the Day c/- me and the boys:

Back to the Gold Coast today. The boys were up at a sparrow’s fart this morning, thumping around upstairs for 10 minutes laughing like loons. Then they made even more noise banging down the stairs, before sneaking to our bedroom door. We could hear them stage whispering sssshhhh be quiet, let’s wake them up (*giggles*). So we called out GOOD MORNING BOYS and they charged in to jump on the bed and yell how did you know we were there?! Gee I don’t know – we must be psychic. Had a laugh when J said suddenly, “Hey guys, listen! Listen!” …and when they did, he farted. Very loudly, for quite a long time. “DA-AD!!” Cue more laughing, wrestling and yelling. Rory also got Teddy to execute a “SPIRAL ATTACK!” Pokemon move on him which was a new one.

Quick cup of tea in between packing the boys’ and my suitcases and checking out of our apartment; the manager gave us his personal number and said next time to call him direct and he’ll give us a discount! Nice.

After brekkie at the Bonjour creperie by the river we split up – to go and skim stones (J and Finn) and to shake cherry trees and get snowed on by petals (me and Roars). A trio of English backpackers even teamed up to shake a big one for him – he loved it! Hopefully next snow trip the boys will get to see actual snow falling.

And then off to the airport and a straight shot home. Til next time!

P.S. Oh by the way we thought big snows were over for the season. Then this happened last week –