Disclaimer: Not sponsored. But you know that by now.

Burleigh Heads is a little town on the Gold Coast that’s like a ‘best of’. It has everything on the Goldie in one place (well, except for the theme parks) but on a smaller scale; gorgeous beaches and surf breaks, a wildlife park just up the road, cafes and restaurants, parks and public spaces, local fashion and artists’ shops, accommodation, ocean views for days and even a national park! It has its very own petite 27.6 hectare slice of untouched rainforest just a short walk from the bustle of central Burleigh.

We love taking the boys there for the kid-sized bushwalks; we’re gradually working them up to longer ones but when we want a nature fix it’s much closer than the Hinterland. Parking can be a bit of a bitch though, especially by midmorning on weekends. The northern entrance is at the end of Goodwin Terrace just a few minutes walk along the beachfront from James Street.

On our outward leg we usually take the Oceanview path (1.2 kilometres one way) as it’s flat and easy and good for a warm up and the water is just… *sigh*. There’s beach access from the path at several points for exploring too. 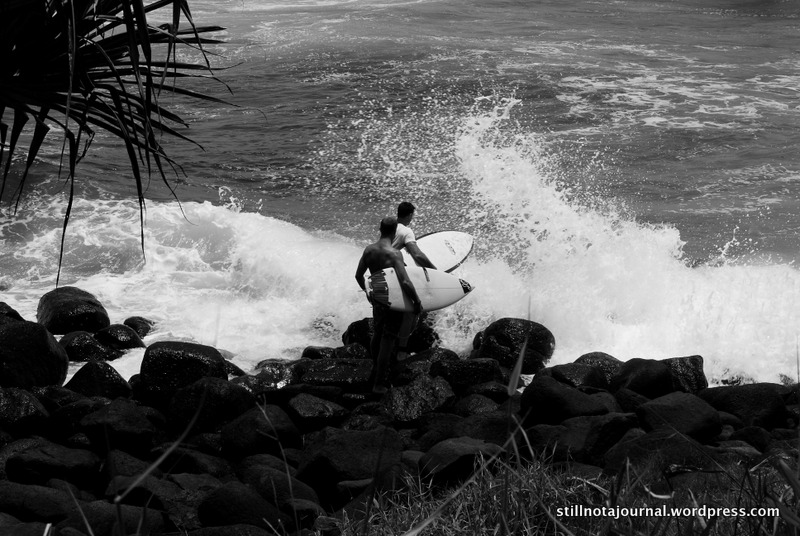 The processes of erosion which put those cool basalt columns on the beach are slow, but occasionally take a leap forward. Or… a tumble. It’s usually because there’s been a lot of rain, or it’s been frosty, or even really windy. In December 2014, after heavy rains, there was a massive rockfall from high on the headland which ploughed through the forest and the track on its way to the ocean. Rangers had to fence off the area (people were still walking the path despite warning signs and it being strewn with rocks and debris) for eight months while they removed dangerous boulders and geo-technical crews repaired the track. Permanent gates have also been installed to close the track during inclement weather, so if it’s pissing rain, a bit frosty or blowing a gale when you’re visiting come back another time.

Anyway it was a massive job; crews removed 52 large, unstable boulders plus another 117 boulder fragments; I think this involved pushing them downhill then fixing up the damage afterwards – that actually sounds like fun.

Those ‘large, unstable’ boulders though… want to know how large we’re talking? While researching this post I found this photo and nearly shit myself:

They didn’t, thank God. This was last July, when workers were still triggering rockfalls just metres away. I’m sure as a damn fool teenager I would’ve been totally into that but now as a parent all I see are flashing neon warning signs.

All sorted and made safe now! (Don’t stress, Mum!)

Made it safely around to the southern side of the park which overlooks Tallebudgera Creek. Tempting glimpses of ‘Talley’ Creek Beach on the opposite shore – remember Talley?

Mangroves and gum trees shelter Echo Beach – it’s super sheltered and shallow and families love swimming here, but not at high tide as your towel will get wet. The bridge you can see is the Gold Coast Highway, and parking for the southern end of the track is at the Jellurgal Aboriginal Cultural Centre. Or across the highway if it’s full.

At Echo Beach the track splits and the Rainforest Circuit (2.3 km return) starts heading uphill. The environment changes dramatically from the pandanus palms, grasses and mangroves of the Oceanview Track to the kind of eucalypt forest and surprisingly dense rainforest that you’d expect more at Binna Burra than in the middle of the suburbs. Complete with bush turkeys. But that’s why it’s so special! 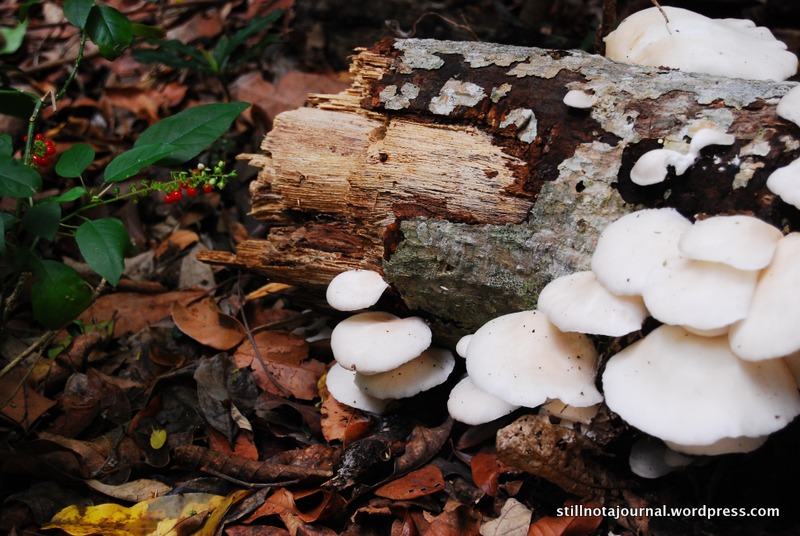 There’s a bit of an uphill climb, and then you pop out of the trees to be rewarded by this: 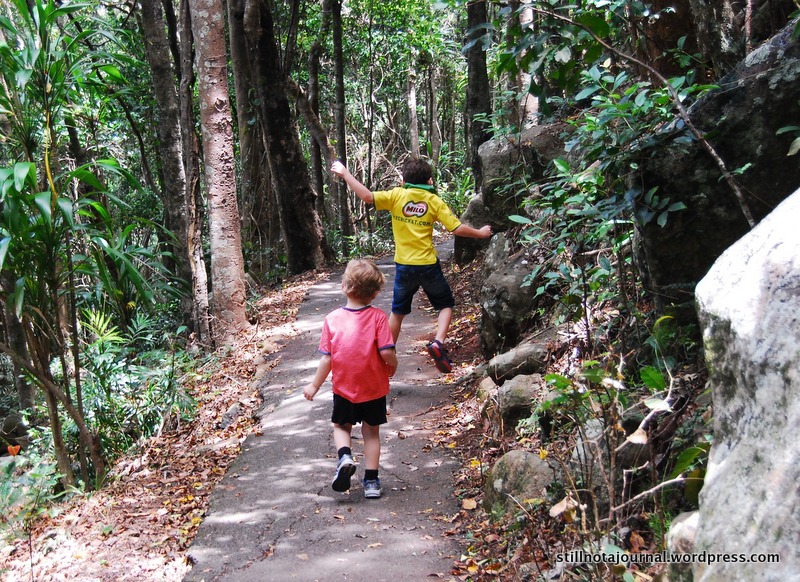 Every time we passed a decent sized rock on the side of the track (every few metres), the boys used it as a launchpad. In this fashion we headed rapidly downhill back to Burleigh.

On the way we stopped in at the other lookout, this one with a great view of Surfer’s and a handy bench seat for canoodling.

I love living near the ocean; it’s so calming. I’ve been living 5-15 minutes from a beach pretty much my whole life and I get a bit antsy if I can’t get a regular fix.

Do you live near water? Have you even seen the sea? I know a lot of people haven’t, which was strange for me to find out as it’s something I’ve always taken for granted. If not the ocean, do you have a favourite piece of nature to recharge in?