*The post formerly known as ‘That time I got tricked into proofreading spam, then ripped off by Upwank’. **

**PLEASE NOTE: Names have been changed for entertainment and frustration venting purposes***.

***There’s quite a bit of venting. And venty language: Parental Language Warning. (That means you Mum.)

So back in April I read a post on Bloglovin’ which mentioned freelance writing jobs via this website called Upwank. Work from home, doing something I enjoy and already do for free but get paid? Sounds perfect …sign me up! Did some skills tests (blitzed ’em), completed my profile, was quickly bestowed with ‘Rising Talent’ status (it’s like they KNOW me!), and started looking through their job postings.

So many jobs! In many different fields but naturally I focused on the writing, editing, proofreading and copywriting ones. Never mind I’ve never done any of that; the idea was to start small and get some experience. I felt confident I was qualified, and put in proposals for jobs I liked that sounded legit. There were a few, but there were lots more that sounded dodgy AF. Articles to be sufficiently reworded so that technically they weren’t plagiarised, students outsourcing their theses, websites wanting content writers to work 40 hour weeks for $300 a month (about $1.85/hr), and people who apparently share my dream of becoming an author one day, but without the desire to do any actual authoring.

…You want a book for five bucks? Get down to the bargain bin at the newsagents, you cheap arsehole!

Must admit to wondering at this point what kind of cheap shit show this Upwank mob were running. I saw so many jobs like that; outrageous demands for thousands of words of content or entire websites designed for a pittance. In the forums I also learned about the prevalence of scams. Like companies who post job proposals then don’t hire anyone because they’re just doing market research. Or clients who give you (and 19 others) a 100 word paragraph to ‘audition edit’ for free, then cancel the job once they’ve got their 2000 words. And companies who ask you to submit work “off the grid” outside of Upwank then take off without paying, or request your bank details for salary payment and then clean you out.

There were some suggestions in the Upwank guidelines, but the general gist seemed to be we don’t actually vet any of the clients or jobs on here, so try not to get ripped off because that’s your problem.

So I was already seeing warning signs, but I was hopeful that those cases were relatively few and far between. Besides, Upwank has a milestone payment system for hourly contracts and an escrow account for fixed rate jobs so I felt confident enough that as long as I only accepted jobs through their website I wouldn’t get screwed over by a client.

Days passed in a blur of rejected proposals. The day my first proposal was accepted I got so excited – OMG I’m going to be paid for this! I’m a professional writer! And then I opened the documents… bummer.

You know those spammy internet pop-up articles light on facts but heavy on promises? Like AMAZING “Secret” tricks to “cure” diabetes or lose 20kg in 20 minutes or a 100 year old woman looks 25 with a $3 wrinkle “trick”? There was shades of that, plus big evil pharmaceutical companies want to pump you full of chemicals just to suck your money out of you but our thing costs much less and it’s also totally natural arseholery. Since I’d already accepted the contract and it was my first one I felt obliged to do it, but I felt really bad about it: if I’d wanted to write and feel guilty about it I’d just tell more embarrassing kids stories on my blog.

Anyway it sucked but I figured I’d just get it over with. I did a great job and finished way before deadline but I did leave in a couple of things, like an awkward phrasing and even a couple of hated quotation marks, as subtle red flags to anyone who happened to step in this crap. Pseudoscientific, manipulative lying crap.

MY WRITING IS NOW PART OF THAT. Fuck.

Well chalk it up to a learning experience and move on. Client gave me great feedback, payment was done, and I continued submitting proposals.

A couple of days later I got an email from Upwank’s Risk Management Team saying that unfortunately they had to put the financial side of my account on hold while they reviewed a transaction on my client’s account. And how did I meet him and what work was I was doing for him? I told them I’d found him via their job postings board, had done some proofreading and the job was completed.

Two days later they wrote back, acknowledging my reply, but then asked me how I’d met him, as if they hadn’t actually read my reply. They also wanted screenshots of our contract conversation and the projects I submitted. Did all that. Asked if there was a problem.

Received a vague form-type message about how they periodically check the accounts of people using Upwank and that my account was currently under review. My account? I thought it was my client’s account.

In the meantime, for any existing contracts, you are still able to log time on [Upwank] and continue working on your contract. We encourage you to communicate with your client, and successfully complete your work.

Um did they not hear me the first two times I said it? I finished that contract. And now it sounded like I couldn’t take on any more. I emailed back to ask if this was the case – it’d been over a week by this stage and I had a couple of new jobs lined up. Another vague reply, this time it was again my client’s account that was under review and they were keeping my money in escrow in case there were ‘inconsistencies’. Whut? What has someone else’s payment got to do with me? They told me again to keep working on my active contracts, despite the fact I’d told them multiple times I didn’t have any, and now apparently couldn’t get any. Apologies for the inconvenience, etc.

Another week later they emailed to say since they hadn’t heard from me they assumed everything was sorted and they were going to mark this ticket as ‘resolved’. 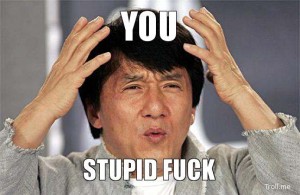 What the hell is going on over there!?

Okay I admit at this point I might’ve got a tiny bit slightly tetchy in my reply, because what the actual F it’s been almost three weeks how long does it take to review a single goddamn job.  But still, I was polite and expressed my feelings with words such as “repeatedly”, “frustrated” and “confusion”, rather than what I wanted to say, which was “you people wouldn’t know your arse from a hole in the ground”.

Next morning another email. This one from the same person but now it’s not from “Risk Management”, rather the “Trust and Safety Team”. I picture her sitting at her desk with a hard hat on. She passive-aggressively lets me know she’d noticed some “irregular activity” on my account and all features were now on hold (no new proposals, no payments, and I now also couldn’t work on those other contracts I hadn’t had for over a fortnight) until I verified my identity.  They wanted high resolution copies of an I.D. which included photo, home address, DOB and signature, as well as a bank statement.

While I normally wouldn’t object to jumping through such hoops for an employer, I just don’t trust this mob. I told them as much, and then a new guy came in and played good cop to try and placate me. They can jam it.

I’m currently trying to delete my account, which naturally they are also making difficult. Screw the money, it’s not worth the hassle. I feel for the freelancers I’ve seen in the forums, clients too, even long-term members, who’re getting similarly intercoursed by Upwank for no reason and now can’t pay their rent, and this is despite multiple attempts to give them the documents they’ve asked for.

Perhaps you’ve worked for Upwank and had a good experience – it rebranded from oDesk and eLance last year – but that could just be a matter of chance. And from many accounts it might just be a matter of time. Would you like my personal recommendation?