After the resounding success! of our last time cycling in Enzed we couldn’t wait to do it again. The boys were pumped, though Finn was quick to check we aren’t riding 25km again are we Mummy?

Of course not darling!!!! 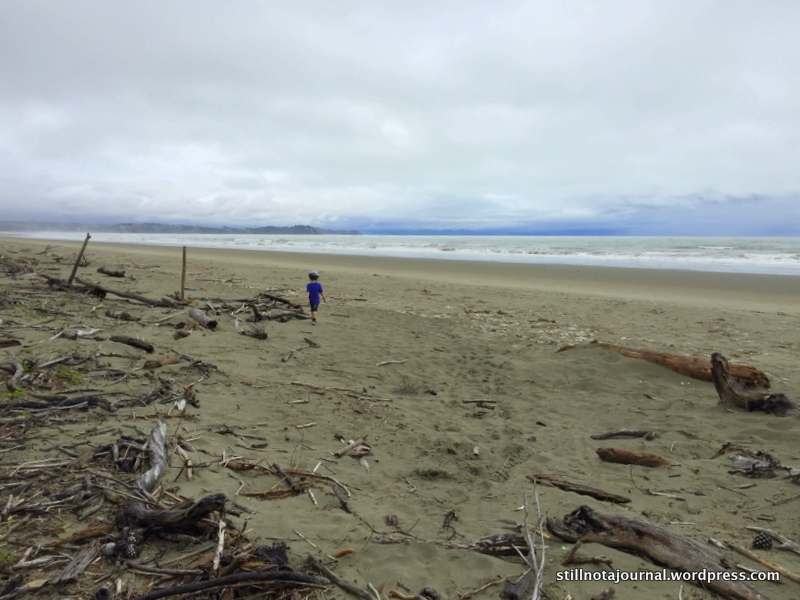 We were going to Rabbit Island (Moturoa) which is only 8km long, coastal and mostly flat, so I figured we wouldn’t get our bums kicked this time. The island’s at the head of Tasman Bay, between Nelson and Mapua, at the top of the South Island, and is part of the Nelson-Tasman Great Taste Trail. (Which is also part of The New Zealand Cycle Trail. Never heard of it? You might soon; guess who was named as its first ever tourism ambassador last week? Our very own Megan Gale! Lucky gorgeous duck. I want your job.)

Anyway, the GTT is a tasty 174km bike route that runs from the gateway of the Abel Tasman National Park at Kaiteriteri past the vineyards, breweries, orchards and cafes of several towns to Nelson Airport. An added bonus for us was that it includes Mapua Wharf (chockers with fantastic restaurants, bars, a brewery, smokehouse, icecream parlour and galleries) which was only two blocks from our bach. We could also catch the ferry straight across to the island from there. Woohoo!

We hired bikes at Trail Journeys Nelson, also on the wharf, which included a nifty zip up bag on the back of mine to hold basic survival shit like water and choccie cake, and return ferry tickets to the island. Just as we wheeled out the bikes we saw the ferry had got in so we hauled arse down to the beach. Skipper Sean waited for us, commenting on the boys’ clean bikes and adding they had to be muddied up a bit to be allowed back on for the return trip. The boys were cool with this.

Thanks to it pissing down all day yesterday there were a few puddles on the trail – poor Roars copped it the worst, with mud and water and shit flicking up from J’s back tyre into his face. We pulled over and the extra waterproof map protector came in very handy as a makeshift mudguard. He still ended up with shit on his face, but at least he could see.

Stopped for a wee, and a wee explore of the beach. The boys found themselves a cubby.

The slight drizzle was lovely and cooling, and it was nice seeing the coast in a darker mood. And almost deserted!

I was chuffed the boys saw the adventure of it rather than the discomfort; at one point Finn yelled out “Riding in the rain is fun!” And Rory yelled back, “Yeah! I wuv it!” Made me smile.

We also checked out a little section called the Conifer Park Track which was built especially for kids; a series of winding tracks spread over half a kilometre or so with some easy climbs and nice fast downhill sections. The boys loved it! Finn shot off ahead, yelling “THIS IS SO SICK!!”

Can’t remember the roads we took after that, but we had lunch somewhere. After that we kind of just followed our noses, still heading clockwise around the island, the picturesque inlet and pine forest making me think we were in North America.

Then it was time to catch a lift back with Sean. We could see him coming from Mapua and made it in plenty of time, but if we’d missed him we could always have called his mobile (his number’s on a noticeboard) or failing that, done star jumps on the beach/thrown the kids in the air to get his attention.

On the way back he let the boys take turns at the wheel! They were stoked.

Our course weaved back and forth a fair bit so we probably covered twice the distance Sean would have, but they did great and were very chuffed with themselves. Their second go at the helm of a calm water boat actually!

(…and on that subject did you know the railing of a Misty Harbour pontoon boat is the perfect height for a two year old to rest his balls on while he pees over the side? That’s something you won’t find in the brochure.)

There was an odometer on my bike but dammit I forgot to note down our starting point! I figure we rode for about 2.5 hours all up, at a (modest) guesstimate of 10kph, so we did about 25km. Probably more. No big hills or meltdowns though!

Stopped off on the way home at the Rabbit Island Coffee Co., which is a fancy Kiwi cafe, being a shipping container in a paddock. Next to it is a big yellow ice-cream school bus that sells a local speciality, real fruit soft serve. We got boysenberry … real boysenberry, from fruit grown in the orchards just over the road. OMNOMNOM…

Then home to get cleaned up and head out for tea on Mapua Wharf. Luverly!