On certain days, this being one of them, many many things cheese me off (for non-Aussies this means piss me off / otherwise irritate the shit out of me). And before you ask, no I have NO idea what being pissed off has got to do with cheese. Unless you are George Constanza and you eat a block of cheese, get massively constipated, and become a resentful little arsehole. Or perhaps it’s because how when you’re pissed off a bad mood will fester and sour, like gross cheese, and then you give the stink-eye to people? Or perhaps when you’re annoyed you throw cheese? Preferably hard varieties? Entire wheels? Launched by catapult? That’s all I got.)

For today I shall limit my rant to complaining about a few stupid little things which I should know by now how to avoid but somehow never do, and some stupid big things done by other people which unfortunately seem unavoidable.

When you’re making your breakfast and you pour the milk in and it hits a cornflake at just the right angle to fountain back out of the bowl and onto the table/ over your book/ into your lap. Almost as annoying is when you go to rinse a spoon under the tap, turn the tap on harder than you intended and the water slingshots straight out of the spoon into your eye.

Smarmy kids show characters who are always generous and good and never fail: I find their faultless virtue highly offensive. Princess Sofia is such an insufferably sweet little goody two shoes, so chirpy and relentlessly positive (and let’s not forget royal because God forbid Disney had a heroine who wasn’t) she makes me want to knee her in the forehead. So perfect all the time; smarter than her dad, more caring than her bitch of a sister, gutsier than her doormat of a mother – why don’t they just put her in charge because she already clearly knows everything.

‘Blaze’ is a monster truck and he gives me the shits as well. He is apparently all about having fun with his friends, not about winning. Yet somehow he always wins. Always! But it’s not all about winning, kids. Really it isn’t. Just because your favourite character never loses that doesn’t mean you’re a loser because you never win. See how every single time Blaze wins, his friends all fawn over him and then he almost immediately blows off the trophy and drives away? He’s not being arseholey, it’s because winning isn’t everything. Especially if you win all the time.

Sometimes I’ll see something particularly annoying as I pass the rumpus room and I’ll give the TV the finger behind the boys’ backs. Repeat to self: It’s only a kids show, it’s only a kids show… Just once I’d like to see what would happen if Blaze or Sofia completely, royally, fucked  something up. Would Blaze go on a ram raiding spree? Would Sofia gee up all the forest creatures into a murderous rampage to eat everyone’s faces off? In my current mood I might actually enjoy that.

When I bend down to hurriedly pick something small up off the floor and miss. Goddamn hand eye coordination. I bend down again, miss it again. Hopefully I’ll get it on the 3rd attempt but if not I may as well put some ACDC on because if I’m going to keep headbanging I may as well do it to music.

… I have noticed two out of three are due to my being such a hopeless klutz. Perhaps if I just avoided cereal / washing things / picking things up I’d be fine.

Bad language everywhere. It does my head in. Even in media written by professionals!

I don’t mean swearing; I couldn’t care less if the front page of the Courier Mail sported headlines with cursing. I think it’d be a step towards more honest reporting actually. (Front page: “Dickheads in Parliament Being Dickheads” with the subheading: “Australia is Rooted.”)

I mean appalling grammar, atrocious spelling and the misappropriation and mangling of ordinary, inoffensive words. I’m no editor and it’s not my job but unfortunately my spelling nazi brain seems to think it is. I see it everywhere. It drives me nuts. It also drives everyone else nuts. 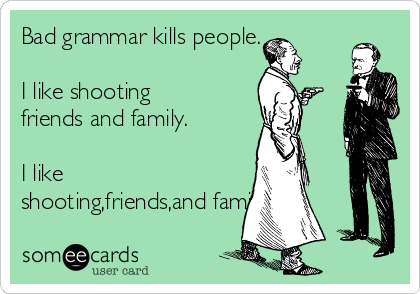 What? It’s *KERB *. ‘Curve’ makes no sense! ‘Kick them to the kerb’ means you’re putting them out for the garbo to collect, which makes perfect sense even if it is a bit harsh.

Do you mean *A SCAPEGOAT*? Do you mean someone was blamed for the wrongdoings, mistakes, or faults of others, especially for reasons of expediency? Or do you mean you robbed a bank and used a goat as a getaway vehicle?

Especially when people see an ‘S’ on the end of a word and compulsively put an apostrophe before it. Ladie’s and gentleman’s, plea’s don’t do that. Especially if you run a cafe and write your own menu, because I will totally be judging you by it. If I see pies and smoothies I am hopeful, but if you have salad’s, sandwich’es and quiche’s I’m looking for the exit. I hate quiche’s! AAARGH!!

Last night I heard a song which spoke to me. It was by Weird Al Yankovic. I will share it with you now because it says everything I want to say but much funnier, and it has cheered me up considerably as it’s sung to the catchy tune of Blurred Lines (it’s called Word Crimes) which I can listen to again because it’s no longer rapey.

Weird Al, you had me at #EVERYBODYSHUTUP.

However, I vehemently disapprove of using the ‘S’ word at 3:10. Not cool, Al!

How about this instead;

Did a monkey steal your PC

Agree with me… troll me… bitch about something completely different, whatever floats your boat. Just know that if you do it with incorrect spelling and punctuation I will fling hard cheeses at you.

Also, if you wish to leave corrections of my syntax and grammar in the comments section please go ahead. As a sign of my appreciation I will send you some cheese in the post.