Finally, the long-awaited day has come!

(AND the long-awaited post, I hear some of you mutter)

Swam with Rhincodon typus – known as ‘rinky dinks’ by me and ‘whale sharks‘ by everyone else – today, and it was totally worth the 20 year wait!

At 7.15am got picked up by MJ and Kirby of Three Islands Whale Shark Dive and we headed for the Tantabiddi Boat Ramp just outside Cape Range National Park. MJ’s name was easy to remember but for some reason I kept thinking Kirby’s name was ‘Rigby’. And sometimes even ‘Digby’. Whut?

At Tantabiddi we were taken by Zodiac to our boat, the Nedo-K, and met the rest of our awesome crew. Except for deckie Marshall, I was pleasantly surprised to discover they were all women! MJ was our photographer, Digby – I mean Kirby – and Liv were our spotters/guides in the water, and Elise, who’d been a guide until last year, was enjoying her first season as skipper. And there was Tiff as well, piloting the spotter plane, doing bog laps of the coast to find whale sharks for us. Of all the tours I’ve done I’ve never encountered an all-female crew before, and they were brilliant! I wanna be just like them when I grow up.

We got the rundown on all the important info including something I already knew; if you get the sick, chunder over the side not in the loo. I hoped I wouldn’t have to as there was barely any swell, but I’d forgotten seasick pills so it was a possibility.. As we headed into Ningaloo Marine Park we crammed ourselves into our wetties and got fitted for snorkelling gear, then scanned the water spotting manta rays and turtles.

Turtles dived as soon as we got near, but a pair of friendly mantas strut/glided right past the boat like enormous underwater bats.

We headed first to an area of Ningaloo called Olive’s Reef. Beginners and less confident swimmers had a snorkelling lesson while the rest of us explored the beautiful corals and stalked the fishes.

Afterwards we had morning tea while Digby and Liv gave us the lowdown on whale shark etiquette.

Filter feeders cruise up and down the water column following food so Tiff had to find rinkies that were staying near the surface long enough for us to swim with them. We were a good ways down the coast when word came that Tiff had found one, so we split into our groups, grabbed our gear, and got ready.

… Splashdown! I kicked clear of the marlin board looking in all directions, but saw only a few jellies. I lifted my head to look over at Liv and make a kind of “wtf” gesture, and she barked “face in the water!!” I obeyed, and the whale shark was right below us! I may have squee’ed through my snorkel, and I know I was grinning because water came in my goggles.

We watched him disappear into the depths, then yelled and cheered as we got back on the boat… WOOHOO SO STOKED! Then Tiff radioed she’d found another one. Two, actually! A circling pair.  We got there ASAP.

We didn’t have to swim far; we just positioned ourselves in the centre of their orbit and watched them lazily circle us.

It was incredible being in the water with these enormous animals! They were like flying spotted buses, moving leisurely but deceptively fast through the blue void, their bodies graceful and fluid. We were so absorbed with watching one that we didn’t notice the other one had changed course and was suddenly headed straight for us.

Cue mad thrashing to get out of the way, quick smart! We scattered to either side and he glided nonchalantly between us, all 6 metres and 6 tonnes of him..

We swam with three more rinkies that afternoon. The last one stayed on the surface so long we hit our max time limit with him; an hour! 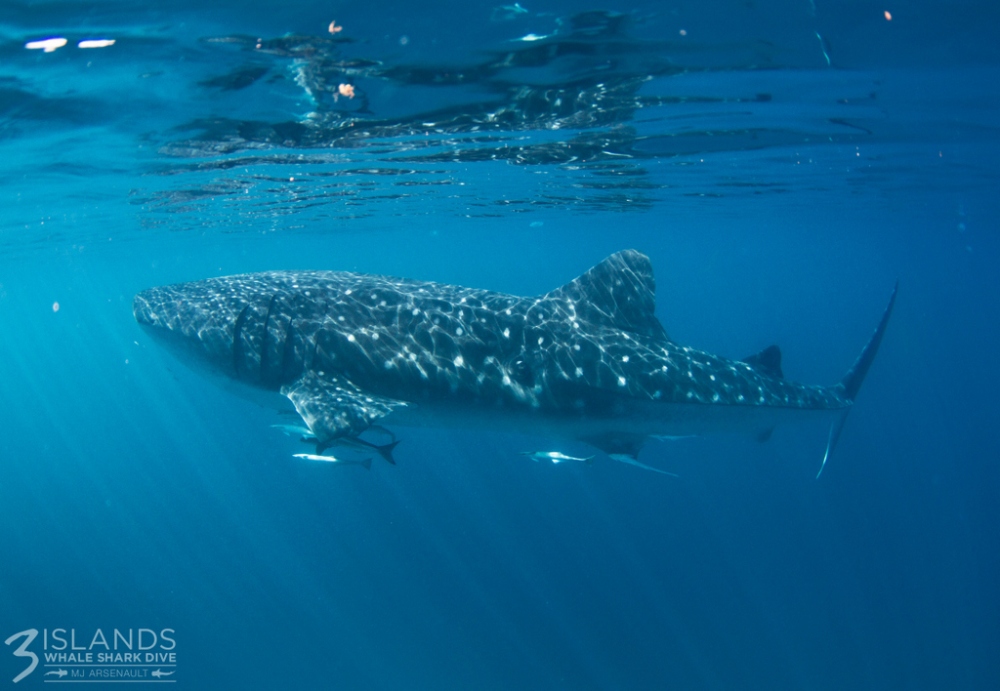 At one point we were swimming along behind and I was almost hypnotised, watching his tail gently pendulum back and forth. I relaxed so much my kicking slowed without my realising it… then I looked around and couldn’t see the whale shark. Couldn’t see anyone actually.

Popped my head out of the water and spotted Marshall who’d been shadowing me; he must’ve thought I was having a heart attack or something. Gave him the “all good” sign and headed for Liv’s upraised arm.

Plenty of whale sharks for us today, we were stoked!

By the time we finished up with the whale sharks we were sooo ready for lunch; I was particularly hungry as I’d barfed during the fourth or fifth shark swim. I’d started feeling a bit dodgy on the boat but figured once back in the water I’d be fine… nope. Got worse. Hung on for another half an hour, then managed a surreptitious chunder as I treaded water waiting to get back on the boat. (No way was I gonna be first to spew over the side!) After that I was fine.

Even when we came across the stinky week-old corpse of a humpback whale on the way back to Tantabiddi – that was cool! We stayed for about half an hour watching it getting nibbled on by several exceedingly large tiger sharks; Marshall was in the zodiac and a shark swam under it and I swear it looked bigger than the boat! Rather glad we were done swimming when I saw that.

Nearly fell asleep on the cruise home, lying in the sun rocking gently with the boat. Got back to Exmouth a bit after 4.30pm, wishing the day could’ve been longer. I was happy my whale shark experience wasn’t quite over yet though… more on that next post!