11pm Wednesday, in midair somewhere between the Gold Coast and Perth.

I’m turning 40 soon and it’s already the best birthday ever because I’m finally doing something that I’ve wanted to do for over half my life. I told you I grew up in Carnarvon? Well my dream of the last 25 years has been to go to Exmouth, a tinier town even further north which is one of the most incredible places I’ve ever heard of despite the fact that hardly anyone outside of W.A. seems to have heard of it.

I was so excited last night I couldn’t sleep! To be honest, I’m actually a bit nervous too. The ‘WOOHOO, first trip by myself in 8 years!!!!’ has at times been ‘SHIT, first trip all by myself in 8 years! What if I forget something really important or lose something really important or miss a flight because J’s not there to chivvy me along?’ (We have a system while travelling with the kids now, and  we pick up each other’s slack.) Plus everyone was constantly telling me to be careful, just because I’d told them I was going over to swim with whale sharks, and now I’m starting to freak out a bit. I’m going to the remote Gascoyne, alone; what if I get lost in the desert / abducted by aliens / humped by a dolphin?

1.00am Thursday, on a bench at Perth International Airport.

Before I left the Gold Coast J had derailed my plan to sleep at the domestic terminal by actually doing research and finding out it closes at midnight. So I caught the shuttle and found myself this nice cosy metal bench at the International terminal. It’s ok as I’m in my sleeping bag but it’s 3.7C outside and keeps blowing in because people won’t stop walking past the goddamn automatic doors. I laughed when J told me he’d also found a website with reviews of sleeping in airports – who knew there was such a thing, and trust him to find it! I rate PER a generous 5/10 for overnighters due to the fact it’s colder than a meat locker in here and they’re constantly making loud, sleep-interrupting announcements threatening unaccompanied baggage and badly parked cars.

I slept for an hour or so and thankfully woke up to my alarm. Along with everyone else. *sorry*

Caught my connecting flight at 5.30am and slept the 2 hours to Learmonth. Woke just in time to see dawn break over the curvature of the Earth.

I thought I saw rocky bumps above the cloud, but it was just cloud. The hills of the Cape Range are slightly higher than 300 metres above sea level but the rest of the hundreds of square kilometres of the North West Cape, including Exmouth, is only around three. 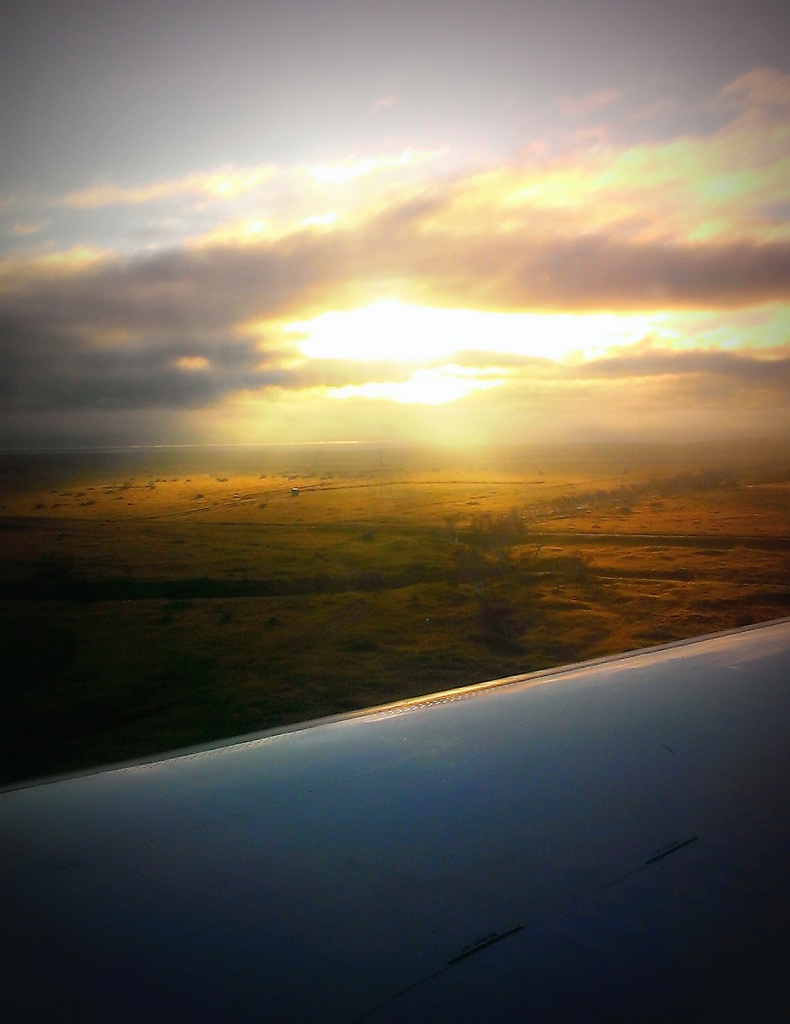 We had a last second aborted landing due to extremely low cloud/fog; we circled for a while until it cleared and enjoyed a bird’s eye view of the North West Cape, fog spilling over the hills of the Cape Range and the morning sun glinting off the waters of the Exmouth Gulf. Landed without any more drama and I rode the shuttle bus the half hour or so into town, feeling the most incredible rush of nostalgia at the flat, red-hued terrain, low scrubby bush and straight-as-an-arrow highway. The road passed through several repaired washouts.

It was cyclone season only a month before, and Exmouth got hit with TWO cyclones right at the end of it. On March 13th Cyclone Olwyn, a strong Category 3, which also hit Carnarvon, mucking up all the plantations and wrecking the homestead at Boolathana Station, among other crimes blew into town with a vengeance. Exmouth got a year’s worth of rain (250mm) in about 2 hours and roads were cut all over the place. Then Cyclone Quang, a bit of a strange Cat 1, hit on April 27th.

Had been relieved to learn even a Cat 3 wouldn’t affect my Exmouth trip, and driving through town they’d cleaned up so well you’d hardly have known it’d happened.

Moved into my home for the next 6 days, the Blue Reef Backpackers, and had a nanna nap. Afterwards I found the Visitor Centre and booked a tour for tomorrow, then walked around admiring all the awesome things I’d forgotten about small WA country towns.

As I walked back to my digs after getting some tea, the most incredible sunset began to transform the sky.

Golden cloud with rosy highlights swirled above me, and I was exceedingly envious to spot a microlight flying overhead right through the middle of it. WHY AM I NOT UP THERE?! Next time.

Meanwhile I didn’t have the camera so I had to sprint the last 200 metres to get it from my room. I nearly infarcted, but it was worth it.

And then just when I thought it couldn’t get any more stunning, this happened:

P.S. What do you think about the new blog theme? I miss the old one but think this one’s a big improvement.