Warning: This post is funny as Hell… to me. You might find it funny (that’s why I’m sharing it), find it distinctly UNfunny (more likely) or even downright terrifying. I’ve been wanting to write a Halloween post but I don’t have any awesome spooky tales to tell, so this is just something that happened while I pissfarted around on Facebook.

Then my cousin Nikki and sweet Aunty Jessie joined the conversation;

I was laughing my arse off, a bit guiltily, because Justine and Nikki were clearly packing themselves. Because CLOWNS. I only found out about Justine’s clown thing a few years ago when I was joking around with Shan for ideas for his 30th and a dressup theme as psycho clowns came up – he told me Justine is coulrophobic. He didn’t use the actual term coulrophobic, he just implied that she was so thoroughly terrified of clowns that if she dressed up as one she might shit herself to death. Or something to that effect.

It just got better and better… or worse and worse, depending on which side of the CLOWNS ARE: FUNNY/SCARY fence you came down on. 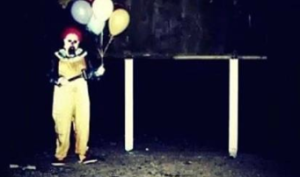 BAHAHAHAAA SO FUNNY AND I AM AN INSENSITIVE BITCH EVEN TO MY OWN BELOVED FAMILY.

But it’s just that I don’t get it. I guess people with pet tarantulas wouldn’t understand my  paralysing fear of spiders either. I mean really, what’s so scary about spiders? Break it down and they’re basically

1) A bug. Living their lives. I quite like many bugs. Dragonflies and ladybirds for example.

2) A bug with a bit of hair. I have hair. It’s not scary. At least not once I brush/tidy/remove it.

3) A hairy bug with eight legs. Eight legs? No biggie. I eat octopus for breakfast. Or I would, if someone got me a takoyaki griddle.

4) A hairy eight-legged bug with eight eyes. Eight round, reflecting, yet dead-looking eyes. Just… watching me.

5) A hairy, eight-legged bug with too many eyes that moves unnaturally fast. Too fast for me to escape if it decided to chase me down. (IT COULD HAPPEN!)

6) Fangs. Venom. The ability to stick on walls behind your head and not be seen until your face is practically right next to it. And a big fat abdomen, so round and full of spider guts even the thought of hitting it with a newspaper or a shoe is just… ***GAAAHH NONSTOP SHUDDERING AND COLD SHIVERS UP AND DOWN MY SPINE, FOR THE LOVE OF GOD, STOP!!!***

So we laugh in the face of fear (but mostly other people’s) and feel better. The “RIDDIKULUS!” charm was always a favourite. Second only to chocolate.

It got me thinking though, about fears. Especially with the kids. All fears are real to a kid, and something that we do to them now could possibly set them up with a not so fun phobia for their whole life. See the little girl in the funny meme up there? She’s not laughing. She’s running to her therapist.

Take Finn for example. I haven’t tested him on this, but due to two specific incidents when he was a toddler he could suffer from gerontophobia (fear of old people) or magosophobia (fear of magicians). The first one was when we were watching that terrifying children’s animated movie UP; The old guy grunted while getting out of bed, and Finn screamed and screamed. Likewise every time in The Wiggles Movie when he saw Wally the magician creeping about.

Justine can trace her hatred of clowns back to a movie too – Stephen King’s IT. I think that might apply to a few people – Tim Curry is a great (demonic) character actor. What I took from that movie however was a short-lived wariness of storm drains. I’m not aware of anything in particular that Rory’s scared of yet, aside from the fact he makes himself scarce when the coffee grinder is on.

As for my arachnophobia, I can still remember a nightmare I had in primary school – I dreamt I woke up to find my bed and pillow swarming with centipedes, beetles, spiders and other nasties. I leapt off the bed to hide under Justine’s, but as I lifted the doona cover at the side of the bed a massive spider that took up the entire space under there reared up at me; in the instant before its fangs sank into my neck I woke up.