Yes I skipped a day but we’re on holidays so sue me.

We’re greatly enjoying camping, the days are absolutely magical; clear blue skies, about 21C… the nights would be more fun if we were allowed to burn stuff though. Last night was colder still; 3C. I’m rugged up with marshmallow socks, trackies, thermal long sleeve, fleecy jumper and sleeping bag rated to 5C, but am still envious of the boys sleeping head to foot under Finn’s big feather doona. It’s very cosy snuggling with them at storytime… maybe tonight I’ll stay on some pretext and ‘accidentally’ fall asleep.

Last night we read the bit where Hagrid smashes down the door of the lighthouse and Dudley, startled awake, goes “Where’s the cannon?” Rory laughed his arse off. Those enormous belly laughs of his, which set Finn off – and for ages after lights out every so often I’d hear one or the other whisper “where’s the cannon?” followed by more hysterics.

Things to do in Lennox Head:

The surfing’s best here in winter.

Ermahgerd views from the cliffs of the township and up the coast. Almost as good as the one at nearby Byron Bay, but even closer and with several hundred less people.

And footy. And soccer. Revel in not having to cajole, banish or trick the kids into going outdoors.

This isn’t for fun, it’s to keep the little sods from trying to wreck the joint, especially from ripping open the rubbish bag. It’s them who are the skulking axe murderers around the tent at night. (Rory this morning: “Oh dat bush turkey is so naughty! Naughty bush turkey.”) DO NOT FEED THEM.

There’s only one caravan and one tent within 50m of us so we’re vastly outnumbered by the local wildlife. Ducks wander through at their leisure, en route to and from the lake. And at the happy hour seafood buffet last night we saw the usual gannets, gulls and pelicans, but also spotted several dorsal fins. Dolphins! Squeee! (And Admiral, there be whales here! While we didn’t see any blows this trip we know the humpbacks are out there.)

The boys heartily recommend these; served in massive jars they were so big the boys were unable to finish for the first time ever, and they can handle adult-sized smoothies. They tried their best; Ro even fell back on the couch groaning his tummy hurt, then after a few minutes he tried some more. That’s my boy!

We built a pretty speccy one today, the boys haven’t stopped raving about it. It was very spacious, with great design features as we’d raided our kitchen for stuff to dig with.

Beachcombed for shells and other treasures to zhuzh up the exterior, and at the high tide mark found some cool stuff; a few shells, a feather, and pumice stones! No doubt from the same eruption that brought pumice to Burleigh beach back in January. We put big ones on the turrets  (to drop on attackers during a siege) then put the rest in the moat as escape rafts, ready to wash out to sea on the high tide. When we finally headed off we told the boys we’d come back to see it.

LATER: The kids were ecstatic we were in time, and frolicked in the water (it really is the most apt word for the way they were carrying on), performing little bum-jiggling dances, and taunting the advancing waves.

Half an hour later the first wavelets breached the moat and our pumice rafts were soon launched to much fanfare. 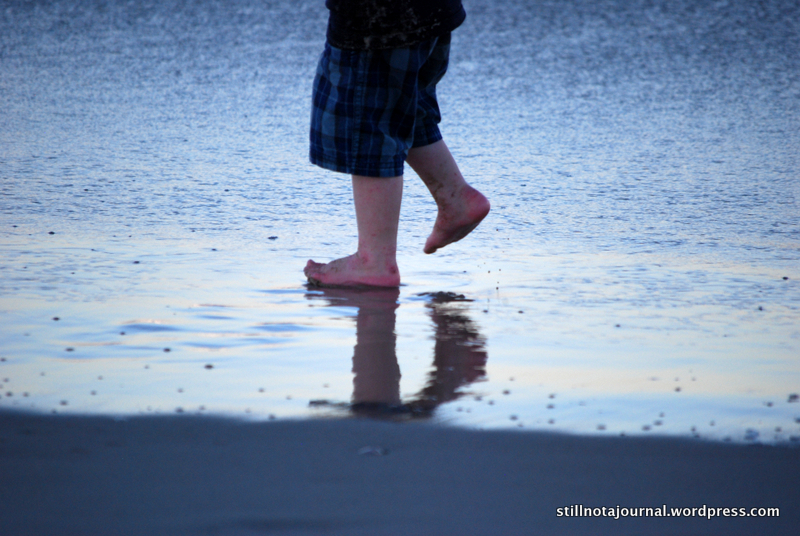 Eventually however the shadows lengthened and it was time to go.

When we reached the car the boys got a little melancholy. Rory came over to lean on my leg and said sadly, “I miss our sandcastle.” Finn got angry. “Why can’t it just be low tide, why does it have to be high tide? Why can’t it stay low tide all the time?” He held it together for a couple of seconds, then his face crumpled and he started howling. I know how you feel mate, it sucks when you have to say goodbye.

We make and wreck sandcastles all the time; I don’t know what was so special about this one. I mean, aside from my totally awesome tunnels. Usually the building of the castle is secondary to the triumphant smashing of it just prior to leaving; both boys, both feet, cheering at the top of their lungs and having a ball. Not this time though.

Sorry kids. Take it as a lesson on the impermanence of life and the importance of living in the moment.

While they wailed, I asked myself: What would  Spider-Man do?

I settled for telling them we shouldn’t be sad the sandcastle will get washed away, but instead be happy that we had so much fun building it in the first place. We have some great memories plus quite a few photos of it, thanks to my fiddling with the manual settings on the geewhiz camera.

Our last night. Dinner at The Lennox Hotel where Rory scoffed half his tea in two minutes flat then lay across two chairs for a ‘rest’. Totally stonkered poor lad. It’s gonna be even colder again tonight… 2C!!