A few weeks ago I was having a shit of a time. Nothing clinical, but it wasn’t the usual dip on the hormonal rollercoaster, or a bad day that could be fixed by playing with the kids / watching Chocolat while scoffing chocolate / finding funny videos of animals on YouTube:

Still cracked me up, though I found I now empathised more with the chameleon.

I AM THE CHAMELEON.

THE i PHONE IS THE WORLD, AND IT’S PISSING ME OFF.

I had no reason to feel like this; I have my health, a loving family, hope and happiness in my life which should therefore be happy bloody fluffy bunnies all the time, dammit! I am not normally prone to sudden inexplicable rages interspersed with extreme apathy and tears, then more rage, etc. It was a very confusing couple of weeks, let me tell you. The last time I was this bad for this long we later discovered I was pregnant. (No, not this time.)

But trying to talk or distract myself out of it didn’t work. The shitness would. Not. Go away. Possibly it was just the looming super moon that made me want to sit in a dark room and stare at the wall, making mental lists of all the reasons I suck. Did it make anyone else a bit nuts? A hundred years ago (pre-family and responsibilities), whenever I got stressed out my cure was to unleash a wild spirit yell and punch an inanimate object for a while, follow that with a thorough emotional vomit into my diary, then head outdoors to wherever my feet took me. But now, with family and responsibilities – plus the fact I’m now supposed to be a grownup and therefore have a more mature way of dealing with things that won’t scare the children, I can’t just take off by myself whenever I want. (Legally.)

But happily the urge took me on a Sunday afternoon, so I headed off to get into something.  I already knew what; I’d had an idea to follow the dry gully that starts on our block (we live on a ridge) down through the bush until it crosses a road or otherwise finds civilisation again. 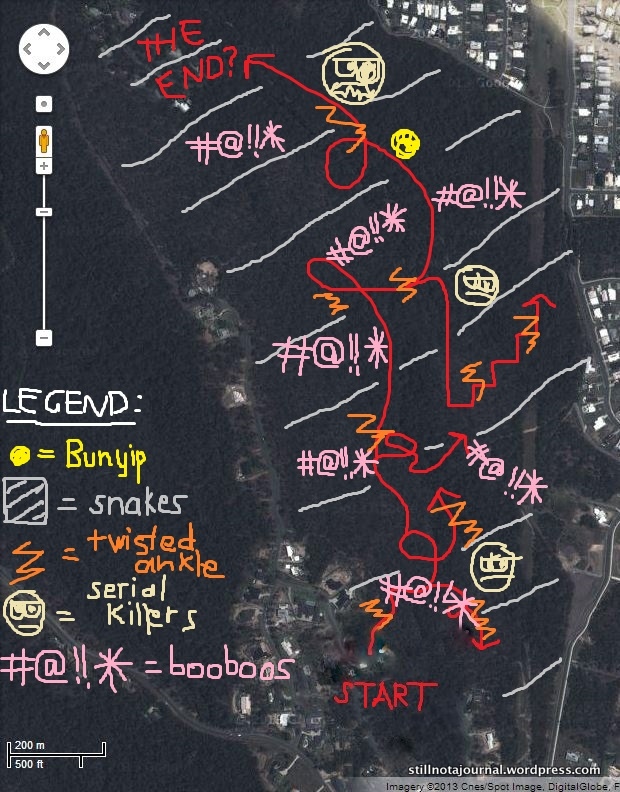 We’re not talking deepest darkest wilds of Borneo here; it’s bordered on all sides by roads so even if I got hopelessly lost I’d eventually pop back out somewhere familiar. But it’s roughly 2 km long , about a kilometre across at its widest, features quite steep and treacherous terrain covered in native forest with no trails or visible landmarks, and is probably chockers with heavily fanged and venomous wildlife. So there was certainly the potential for disaster adventure!

So I skipped first to the bottom of the garden. Literally the bottom – our gully ends as a big rocky hole, which in turn drains into a large pipe which passes under the road. This pipe was my first obstacle – about a metre wide and maybe 30 metres long, though it felt longer. You could say I crawled through a sewer, OR you could say I went down a rabbit hole like Alice in Wonderland – depends how you look at it. I could even pretend I was learnedly quoting Lewis Carroll to myself as I headed underground, but that’s crap. I was too busy straining my eyes (in what little light I wasn’t blocking with my fat arse) to watch out for spiders.

I’ve had to deal with more of the larger sort since moving to Queensland and I feel quite proud to have conquered a little of my arachnophobia but there’s still the surprise factor. That has been known to cause weird high pitched “UUUUWAAAUUU” type vocalisations paired with completely involuntary, explosively violent kung fu moves that make me look a lot like Kermit the Frog doing the panic dance.

I emerged into the light at the end of the tunnel trailing a couple of old spider webs but otherwise none the worse for wear, and followed the gully into the forest. I love bushwalking, though I can’t remember the last time I went bushbashing (off trail) – and I’d forgotten how much more labour intensive it is than walking marked trails, even rough-as-guts ones. Pretty much every second step was onto hidden rocks which promptly rolled underfoot, or I’d get tripped by lengths of native grass that wrapped themselves around my shins. These distractions would make me look down too much, so I’d also end up poking my face into low hanging sticks and blundering into massive spider webs.

The gully banks got gradually steeper so I just stayed in the rocky bed, and soon encountered a decent sized waterfall. It was too high with too many rocks below to just jump, so I found some hand and foot holds and started climbing down. I was still a fair way up when a wedge of rock under my left hand slid suddenly from the cliff face like a book from a bookshelf. It was about the size of my head and tumbled just past my shoulder, splintering on the rocks below. I  grabbed a new dodgy handhold, half turned from the cliff, and somehow managed to skid on my bum  / jump the rest of the way without breaking anything.

When you’re enjoying the great outdoors the best bits are the dangerous bits, but only if you don’t get killed.

I spent a happy hour or so hopping rocks and boulder scrambling, finding hidden waterholes and fungi, and enjoying the peace and quiet of the bush interrupted by the occasional magpie or whipbird. 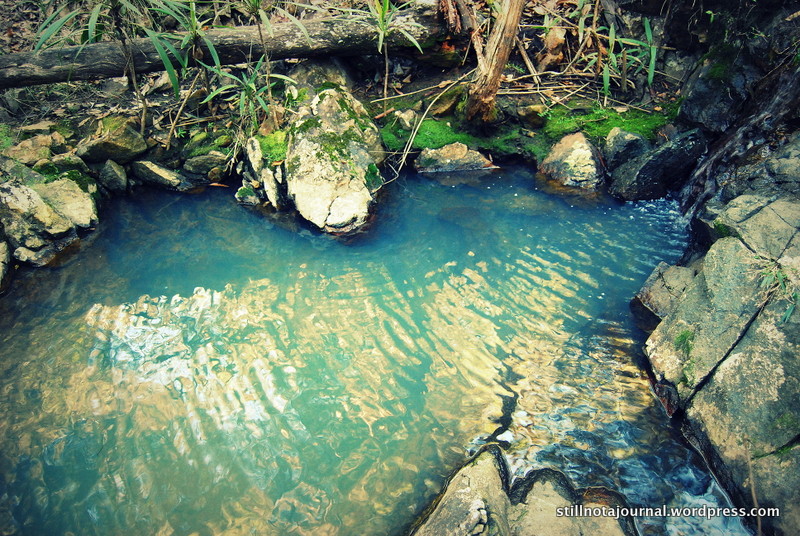 Then I rounded a bend and the narrow streambed suddenly opened out into a wide, deep, patently unclimbable chasm.

Just as I thought I’d have to find a way around, I spotted a massive fallen tree off to the side which formed a very handy ramp. I eyed it, thinking: Reasonable? Or RUFKM? Considering I survived a tomboy childhood with no broken bones, only a sprained ankle from falling through a rotten tree house floor, my risk assessment system has up to now worked pretty well. Or perhaps I’m just a wuss and don’t push the envelope enough. Again, it depends how you look at it. 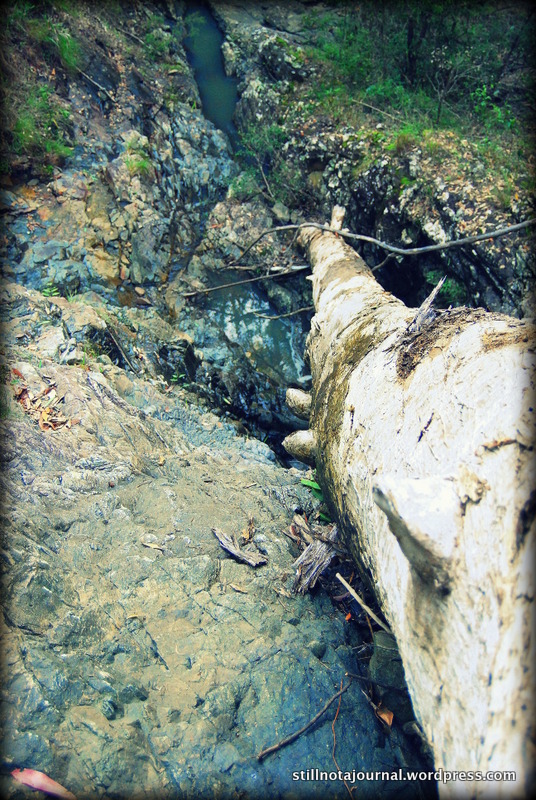 What ultimately decided me wasn’t the prospect of falling off the ‘Sui-Slide’ onto jagged, brain crunching rocks, it was that even if I did manage to reach the bottom unscathed I’d then have to climb straight back up again; the general direction of home was behind me, the sun was gone and twilight was going fast. So I turned up the hill toward civilisation and after a good heart pumping climb popped out onto a fire trail, following it safely back to the road and home. 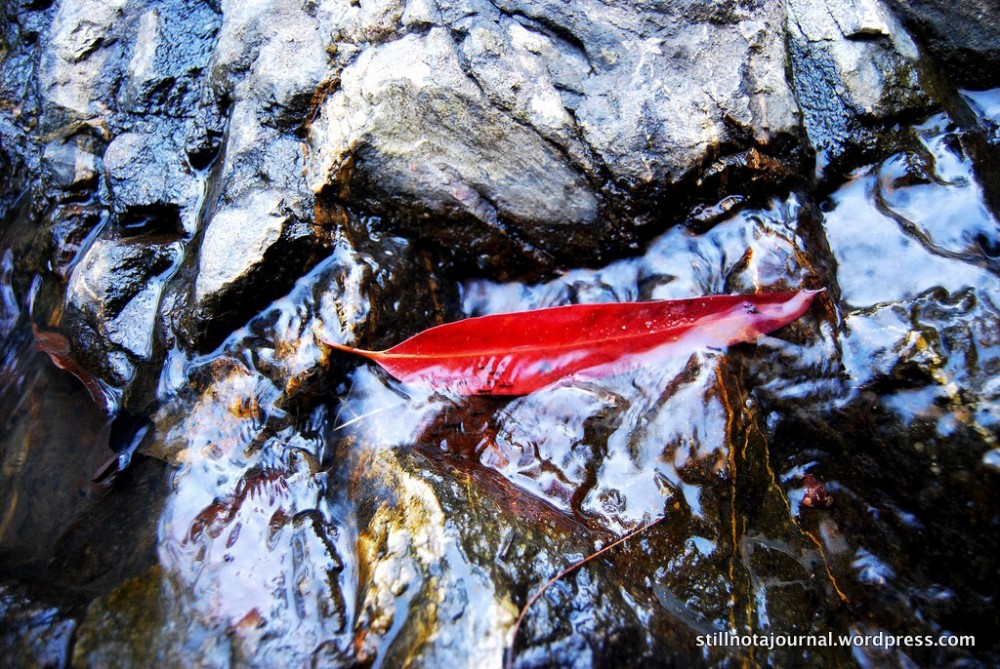 The best part? I felt like myself again. All reborn and shit. The black cloud that had followed me around for almost a fortnight had cleared and I felt happy and energised and at peace.

So what’s the moral of this story? You can take your pick as I’m sure there’s something in it for everyone.

1). Nature heals. Unless it hurts when you tear yourself a new one sliding down a rock face on your butt. Or if something from said Nature chooses to bite you.

2). There are treasures hidden right in your backyard, you just have to get out and find them. Metaphorical treasures of beauty and experience that is, so no digging holes in your neighbour’s nice lawn.

4). Spiders are scary, but they don’t wanna be. They might not even like having so many (waaay too many) legs. But none of us are perfect, and that doesn’t mean we deserve to end up upside down on the floor with a broom through our head.