Not a sponsored post, but I sure am plugging stuff in it.

Guess what? I won a blogging award!

The best one, in my opinion – a Liebster, which is a big warm I likeses you from fellow bloggers and makes me feel all gooey. I was first nommed by Half A 1000 Miles –thanks Huffy!- with whom I fell instantly in love when I stumbled across her hilarious post That Time I Flung Poo in The Bloggess’ comment section.  You need to check her out if you haven’t already – you’ll laugh so hard you might accidentally fling some poo of your own.

I googled “Liebster” and learned it’s a German word meaning “dearest”, “beloved”, “sweetheart” etc. Aw! I should’ve known it already as it’s like liebchen which Mum sometimes calls us, and the cats too. Mum’s side of the family is Dutch and over the years we’ve picked up a few of the things they call each other. (Nice things!!) I remember my late Uncle Herm, who was 11 years older than Mum, always used to call her some variation of grietje, which means something like ‘ugly baby bird.’ But he meant it with love. Same as when I call Justine a moron.

Anyway, when you’re nominated and if you want to, you can do these things so people can get to know you better. I no obligate you!

How did you arrive at the name for your blog?

Circuitously. I had a really hard time thinking of any, my ideas were so crap. I thought Flog-A-Blog sounded funny but soon learned flog is code for fake blog. Nope. I liked Backyard & Beyond but discovered there’s already a kickarse website by that name. Odd Blog was taken too. Finally decided to name it Still Not A Journal because it’s kind of a continuation of my diary-not-a-diary I’ve been keeping since Year 7, and I fully intended to use it for lots of post ideas. However in nearly three years I’ve only used it six times! D’oh.

If that had already been taken, what was your second choice?

I think if that one had been taken too I would’ve cracked it and just given it some bullshit name because I was well over it by then!

If one day your blog took off, and merely by mentioning and recommending someone else’s blog, they too could become famous, what blogs would you “bring up the elevator” with you?

Huffy’s of course!! Half A 1000 Miles is literally only a few months old but she already has this blogging thing down pat – she’s already won her first blogging award, that tells you how good she is. I would definitely also give a shout out to Matt Robertson who lives here on the Gold Coast and does our place proud with his stunning photography… when I grow up I want to photo like him. I also adore Erica over at 006.7 EKGO (she’s a librarian IRL so I think that’s a catalogue reference) though she’s on a blogging hiatus at the moment to concentrate on other writings and ventures. Also my good friend Robyna in Brisbane writes a beautiful, deeply personal and very important blog named Chasing His Sunshine, which is dedicated to her son Xavier who was tragically lost to SIDS when he was two weeks old. She has a way of writing about grief and healing that makes it possible for the rest of us to understand and be educated, while also providing much needed support to other parents who have suffered that horrifying loss.

What do you wish your non-bloggy friends knew about blogging?

How awesome it is and that they absolutely should be bloggy. If not blogging, then reading. Annnd, HOW MUCH I LOVE COMMENTS. COMMENTS ARE BETTER THAN CRACK. Or even chocolate. *hint hint*

What’s your favourite TV show of all time?

Too hard basket. I am a geek after all! M.A.S.H, The Goodies, Stargate SG-1 and the spinoff Atlantis, Firefly, and just recently, Forever. I get so pissed off when great shows get canned! I am currently loving Daredevil on Netflix (may it have many more seasons!) and am rewatching Supernatural which is waaay funnier than I remember. I do love one reality tv show – The Amazing Race, and would love to do it!

Have just found a very promising new show; Lucifer. It’s brilliant! It’s a bit hard to classify, as it crosses several genres including comedy, drama, police procedural and supernatural action thriller, but I love that. It’s based on the graphic novel by the same name written by Neil Gaiman, but is very different from it. I love that it’s so unexpected! And irreverent. The lead, Brit Tom Ellis is perfect in the role and I love the hilarious back-and-forth his Lucifer has with the Detective, played by Lauren German. This show has a great deal of potential and only a few episodes in I love it already. Definitely a contender!

I can narrow it down to a single favourite book though! Good Omens by Terry Pratchett (RIP) and coincidentally (I think not)… Neil Gaiman.

(Update 17 August 2017: OMG *Just* found out it’s just been cast for a series, with Michael Sheen as Aziraphale and *hyperventilates slightly* David Tennant as Crowley!! *screams* *jumps around like madwoman* *hyperventilates*) 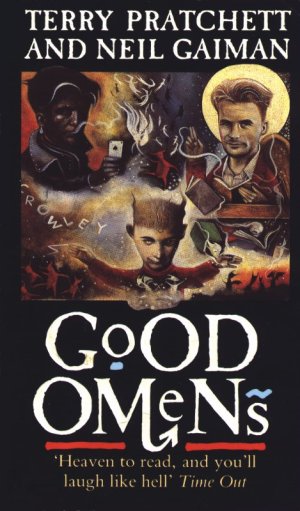 Such different writing styles but they complement each other brilliantly; dark humour, LOL humour, suspense, mystery, angels and demons. In my head I see Benny Cumberbatch as Aziraphale and Johnny Depp as Crowley.

What’s your personal favourite of your own blog posts, and why?

Of the 101 posts I’ve written so far my favourite is probably the Hilarious or Horrifying clown one. I love it because it was kind of collaborative (I used my family via Facebook), it still makes me LOL, and I got it done in an hour or so, which is much less time than my posts usually take.

Rate these in order of what you don’t have enough of right now: sleep, peace, money, time, love.

Time definitely is top! Which is why I stay up way too late trying to get posts finished and thus don’t get enough sleep. Sleep is second. Peace is third, because it’s week one of the Easter holidays and the boys are getting on my tits already. Then money, because we’re fine there at the moment, then love because loving families (plural) and cuddly boys. The only thing I’m missing there is a fur baby.

What was the hardest part about your first year of blogging?

I’m a very guarded person. What I found really hard then I still find hard now – being able to write without feeling all self-conscious. And the sound of crickets after hitting ‘publish’ more than once made me think about making my blog private. I know they say ‘blog for yourself’, which I do, but when you put your heart into something and put it out there and it sinks without trace it’s really hard to not take it personally.

Where did you spend most of your life, and where are you now?

I’m 41 this year, and for my first 21 years I lived in Carnarvon, a semi-remote town on the West Australian coast. (Well, was based there, even though I was away at boarding school and uni.) I moved to Queensland in 2014 and it was the first place that had really felt like home since. I could live somewhere else for a while, but I’d always want to come back here.

What are your favourite “BIG” blogs?

Jenny Lawson aka The Bloggess is surely the biggest, and the best! Her blog is unfailingly awesome even when mundane, she inspires without being all wanky about it, and she has a veritable army of followers who support her and each other with kind words and hilarious comments. OMG the comments! I’ve found so many great bloggers and kindred souls there. I also find Allie Brosh’s scribbles at Hyperbole & a Half ridiculously funny, and heartbreakingly raw. Here in Oz I also enjoy a dash of Mrs Woog with my morning cuppa, and I only recently discovered Finding the Universe which is possibly the best travel blog out there and where the hell have I been?

If someone wanted to show your blog some love, what would be your preferred method — a Facebook share? Sharing on Twitter? Subscribing to your blog? Commenting? Submitting your posts to Stumbleupon? Or something else?

Hey man, all of the above! Even though I don’t even know what Stumbleupon is. But if you don’t have time, follows and comments definitely – blogging crack, like I said. Though if you have trouble commenting like my dumbass of a sister let me know how I can make it easier for you. By… er, commenting.

Next, 11 totally useless snippets of information about me, more of which are in my Blog Hop post:

I can’t nominate any of my newest bloggy friends because they’ve already been nommed by Huffy, and I can’t nom any of the other blogs I follow because they’re too big. Agh! What do I do?

… hang on, there have been multiple cross-nominations going on while I’ve been dragging my arse writing this post, so guess what guys? I’m nomming you too! You deserve all the lobsters. I won’t demand that you answer all my questions though since you’ve already done your posts, but there’s always the comments if you feel like cherrypicking one or two.

Sarah at Buffalo Schnitzel of the awesome blog name. She lives in Germany (Schnitzel) but has family in New York (Buffalo) and so travels a lot – if you travel with babies check out her post Thirteen Flights for great tips. She writes lovely long posts and after reading one I feel like we’ve been chatting for hours over tea and bickies.

Karen at Kayrayiam. She is direct, opinionated and I love her honesty. I know a few nurses and they all seem to have that tough-as-nails demeanor and take-no-prisoners attitude. I’m going to try to be more like her.

Laura at Caledon Acres. She sounds so much like me, and she’s living my dream life – as in, the life that I’d love in theory but in practice would suck at. She runs a farm and is creative with her hands and is surrounded by happy critters whereas I forget to water the houseplants and have about 1,000 projects I haven’t finished.

Linda at Tales from the Cabbage Patch. So funny – I call her Patchy, and she’s like Huffy’s equally evil twin. She’s totally bonkers, which she proved when she took up the A-Z Challenge to blog every day in April. Her first one is called “A is for… assholes.”

Meg over at The Protein Fart. Blog name=win. Entire blog=win. The ONLY health and fitness blog I enjoy reading, because she is funny and down to earth and a Kiwi and farts during yoga like I do and has an actual sense of humour about this whole wellness thing. Her post Oh… those guys makes me pee myself every time.

And here are their questions, should they wish to answer them: